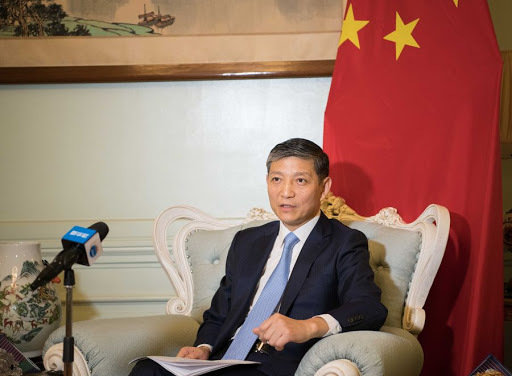 Egypt and China will advance their strategic cooperation in 2021, with China continuing its assistance to the Egyptian side in obtaining the medical materials needed to combat the novel coronavirus (COVID-19) pandemic.

China’s Ambassador to Egypt, Liao Liqiang, also said that China will also provide its expertise and treatment protocol to Egypt, to help the latter overcome the pandemic.

During a press conference on Tuesday, Liqiang said that the Chinese vaccines can be used and stored, at no additional costs, using the current cold chain systems.

He also said that once China completes the accreditation procedures for the vaccines it is currently manufacturing, they will be made globally available at affordable and fair prices to help developing countries combat the pandemic.

Liqiang added that China is keen on cooperating with Egypt, saying, “The Chinese side is keen to advance the Belt and Road initiative and Egypt’s Vision 2030, support Egypt in the development of its New Administrative Capital (NAC), and support the construction of electric train connecting the NAC with 10th of Ramadan City.”

He added, “Besides, [we also support] the development of the Suez Canal Economic Zone (SCZone) and combating desertification.”

The ambassador further noted that Egypt was the main country to call for the African Continental Free Trade Area (AfCFTA), which will officially come into force next year. He noted that the agreement will support Chinese-Egyptian-African economic cooperation.

Additionally, Egypt, as a large Arab, African and Islamic country, has a distinct geographical advantage, with the Chinese side keen to protect multilateralism and free trade in Egypt. This will ensure further opportunities, cooperation, and investment between China, Egypt, and Africa are created.

“The current year experienced great cooperation between Cairo and Beijing in combating the COVID-19 pandemic,” Liqiang said, “Cooperation in the medical field to combat the pandemic included the operation of two production lines to produce medical masks.”

The developing bilateral Chinese-Egyptian cooperation has ensured many achievements have occurred in all fields. The volume of trade movement between the two countries reached $10.2bn in 2020, reflecting a 6.6% increase compared to last year.

Additionally, direct Chinese investments in Egypt during the same time period have increased by 19% to $89m.  By the end of November 2020, the volume of investments from China to Egypt had exceeded $7.7bn, Ambassador Liqiang said.

The education sector has also seen great cooperation, with opening ceremonies taking place for a laboratory and technology institute, in addition to the coordination of two Chinese Le Pen workshops.

A Chinese archaeological team has also contributed its expertise to an Egyptian team in promoting archaeological discoveries in Luxor in light of the pandemic, the Ambassador said.

Liqiang pointed out that the friendship between the Egyptian and Chinese peoples has deepened, with Egypt’s President Abdel Fattah Al-Sisi issuing a decision to illuminate Egyptian landmarks with the Chinese flag. The move was an act of solidarity with the Far Eastern country, and came alongside online support by Egyptians during the pandemic, through videos, competitions, and celebrations.

The ambassador also said that the Egyptian economic reform programme has contributed to mitigating the effects of the COVID-19 pandemic in Egypt.

“Thanks to these measures, the Egyptian economy has achieved a growth rate of 3.6%, which ranks the country first in Africa and second in the Arab world,” he added, “Consequently, the World Bank praised the Egyptian reform measures, describing them as successful. Moreover, since 2000, poverty in Egypt has decreased for the first time.”

The ambassador congratulated the Egyptian government for this progress.