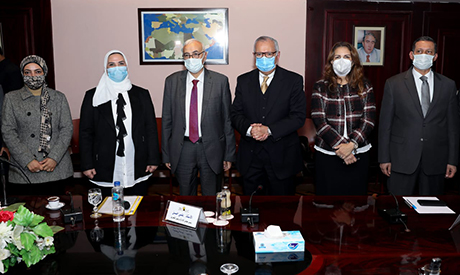 The symposium tackled the human rights and private and public freedoms in Egypt, shedding the light on the progress achieved in this matters.

It also criticized some organizations for obtaining information about the human rights status in Egypt from the terrorist-designated Muslim Brotherhood Group that considers those who kill, shed blood, and attack innocent civilians, mosques and churches as “political prisoners”.

Speaking at the event, the social solidarity minister said her ministry attaches special importance to ensuring the provision of social and economic rights to the neediest segments of the society.

She revealed that Egypt was one of the first countries that joined international agreements on the rights of women, children and people with special needs, citing that the Egyptian Constitution of 2014 guaranteed the rights of these segments.

El-Qabbaj pointed out to the prime minister’s decision on forming a ministerial committee for social justice, asserting it demonstrates the government’s determination to go ahead with the implementation of social protection policies.

She concluded that the NGO draft law approved by the Cabinet will come into light soon.

The Ministry of Social Solidarity pays special attention to secure economic and social rights for the neediest nationwide, El-Qabbaj said.

Advocating for human rights has been all the rage over the past six years; and Egypt prides itself on the fact that it was among the first states to sign the international conventions on the rights of women, children and people with special needs, the minister added.

In addition, the country’s commitment to human rights was also made clear in the Egyptian constitution of 2014, which affirmed certain rights for various segments of the society, including, women, children and people with special needs; and all segments of the Egyptian society were represented in the parliament, the minister added.

Furthermore, she showcased the ministry’s efforts to reduce poverty through geographical targeting and to reach out to those in need the most, including women, children and people with disabilities, El-Qabbaj noted that the number of beneficiaries from the ministry’s Takaful and Karama cash transfer program has so far amounted to 3.8 million households nationwide.

The ministry has also managed to provide support to 20,000 street children since the program was launched in mid-2016, she pointed out.

The minister also praised the active role played by women and youth in society-related issues in general, especially the major role of the Egyptian Red Crescent (ERC) volunteers to assist in the fight against COVID-19 and many other challenges.

Further on the ministry’s role to fulfill citizens’ essential needs, the minister stressed that the issue of human rights should not be sheer rhetoric; rather, certain indicators are supposed to reflect if such rights are consolidated in the real world.

Therefore, Egypt has always been keen on dealing with poverty as a multidimensional phenomenon, not just as a lack of money as mostly viewed, conditioning eligibility of needy families for cash support upon their children’s regular school attendance to ensure their full enjoyment to the right to education.

Statistically speaking, the ministry offers support to more than 50 percent of the poor population in cooperation with the relevant ministries, NGOs and private bodies, El-Qabbaj said.

She noted that such cooperation is the crowning achievement of the ministry’s policy, which views development as not just the responsibility of the government or a particular ministry, but as a social responsibility requiring participatory approach.

She also stressed that coordination, especially by linking relevant databases, had a great positive effect on the accurate targeting of aid recipients.

The president’s “Decent Life” initiative is an example to follow to support the neediest households in the State’s poorest villages, she said. It also reflects President Abdel Fatta Al-Sisi’s appreciation of the Egyptian countryside and the communities and villages in most need, and his awareness that the results of development should serve in meeting the needs of these areas and alleviating the suffering of their inhabitants, she added.

The initiative aims at reinforcing social, economic and cultural development and securing basic services in poor villages and supporting those in need the most to improve indicators of social protection and employment, in line with the state’s Sustainable Development Gaols for 2030.

Committed to offering safe housing opportunities for unprivileged households, the ministry is currently engaged in a project to provide these people with housing units in new cities which have industrial zones to offer job opportunities in various factories, the minister pointed out.

She added that the president’s directives also included supporting the role of day care nurseries by streamlining their licensing procedures, establishing more nurseries in all governorates, improving nursery standards and providing adequate training for nursery workers.

El-Qabbaj indicated that out of the 24,769 nurseries nationwide, 14,821 are licensed, while the other 10,488 are not, noting that the ministry is trying to handle this problem through a special committee for unlicensed nurseries, which was formed under Prime Minister Decision No. 2371/2020.

“No country in the world has a completely good record in human rights, even the United States,” El-Oraby stated, explaining: “Being in prison in the United States means that your life is over as it is the case in Turkey as well.”

The former foreign minister pointed out to a gap in concepts between Egypt and some foreign countries, clarifying that Egypt touches on an integrated and objective concept of human rights, including the right to health, security, education, social care, and clean air.

The concept of human rights abroad is more complicated, as it tackles freedom of speech, press, cultural freedom, and democracy, he said, adding that these concepts address a specific portion of human rights, not an integrated vision.

The European Parliament became a pressure tool on Egypt over the past years by issuing statements that need to be responded to, El-Oraby underlined, noting that it represents populists and green parties that exploit any incident for political purposes.

The demands of international human rights organizations are hilarious which could not be accepted by any country, he said, affirming that these demands will continue to press Egypt in the coming period.

He asserted that the House of Representatives and Egyptian human rights organizations should play their role well, as well as forming friendships between the Egyptian parliament and its European or French counterparts.

Coronavirus in Britain: Over 50,000 cases recorded overnight for first time