Despite the economic effects of the novel coronavirus (COVID-19) pandemic, the world still stands on the edge of the biggest wealth transfer in history.

Over the next decade, an estimated $15trn of wealth is set to pass down to the next generation. It also means that four in five women (82%) from high-net-worth (HNW) families expect to inherit a large portion of this substantial wealth, Barclays Private Bank has said in its new research, entitled ” Smarter Succession: Women and Wealth”.

As this wealth transfer is fast approaching, Barclays Private Bank commissioned global research to investigate the role of women in wealth. The research also covered succession planning, family business decision-making, and ultimately, how these roles are shifting family and banking relationships.

The research showed that the share of wealth owned by women has risen considerably over the past decade, with a third of the world’s wealth under their control today.

“In fact, women are increasing their wealth faster than ever before, adding $5trn to the wealth pool globally each year,” Barclays noted, “However, biases that persist within some HNW global families mean women tend to have less involvement in the family business, despite similar levels of ownership to men.” 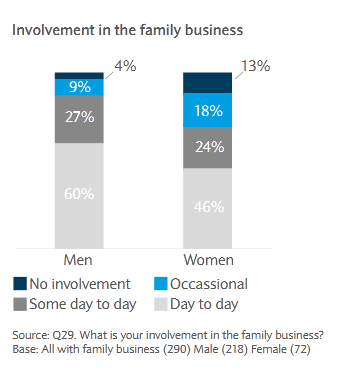 Similarly, the bank noted that decisions around family wealth very much remains a role for the men in some HNW families.

There is, however, a cultural shift occurring, with younger generations having a less traditional outlook on life. This generation does not necessarily see the role of women in the same way as in the past.

This shift has been recognised in the financial services industry, but still, women often feel they are treated differently to men.

The research found out that the wealth management industry remains heavily male orientated, and this creates subtle biases towards HNW women who seek financial advice, often leaving many feeling unheard. In turn, Barclays said that this leads to fewer women seeking professional advice for their own wealth.

“Changes are needed within financial services to better support the growing number of HNW women across the globe, as they inherit ever greater wealth and responsibility,” according to Barclays.

Despite the growing share of wealth among women, Barclays highlighted that women remain significantly less likely to be involved in the day-to-day running of the family businesses compared to male family members.

Barclays found that only 46% of women are involved on a daily basis, compared to 60% of men.

“Women are also over three times more likely to have no involvement at all within the business than men (Males 4 %, Females 13%),” according to the research, “This is despite a majority (57%) of women now holding a similar level of direct ownership of those businesses, compared to men (54 %).”

The research also noted, “The fact that female ownership of family businesses does not equate to high levels of day-to-day involvement, potentially leaves female voices less heard in family business board rooms.”

The research revealed that women also have less involvement when it comes to wealth. They are also unlikely to be involved in managing the family’s financial wealth.

It found that four in ten women say they are not involved in the management of the family wealth, compared to only one in ten men. Even those women who are involved tend not to be the main decision maker, with the main decision-makers in HNW families tending to be the fathers and sons.

Barclays also noted that 83% of key financial decision makers around family wealth in HNW families are male, compared to only 11% being female.

Moreover, the research said that women without involvement in the management of their family wealth tend to have significantly less interest in finance and investments (17%). This compared to those who are involved, which account for 39%, potentially leaving their priorities and perspectives ignored.

As a result, when it comes to conversations around wealth, Barclays said that 39% of global wealthy families believe women are ignored in any financial discussions. The research found that this is more common in Indian families, with 76% agreeing, and for those in the Middle East, with 46% agreeing. Both compare rather starkly to only 27% in the UK.

However, this situation is changing, as globally there will be a further shift in the involvement of women.

The research said that there is a slow generational shift in the involvement of women, and the family roles that women have typically fulfilled, are evolving. It mentioned that HNW women are taking an ever greater role in the financial and business decision-making of their families.

“Almost two in three (62%) believe that women have a core role in running the family business,” Barclays wrote in its report, “And, whilst this falls to 20% for families in the Middle East, both bankers and experts believe that equality is on the rise globally.”

The research assured that younger generations are driving the change in women’s roles within wealthy family businesses and in decision making over wealth. This is both supported by, and in some cases a challenge to, their parents’ more traditional outlook.

More women are feeling empowered to achieve ever higher levels of education and take on professional positions within the family business.

Female under representation in the financial advice industry

The research said that the female under representation in the financial advice industry can lead to women feeling uneasy and uncertain.

It found that most key advisers to wealthy families are male (71% male vs. 17% female) and, as a result, women tend to have a male financial adviser.

“There is evidence to suggest that, due to the male dominated industry, both in the adviser profile and the historic cultures in the industry, curated traditionally by men for men, women too often feel excluded,” according to the research

The research also showed that 59% of HNW families believe that women are treated differently to men by professional financial advisors, and as a result, fewer women feel truly understood by their professional advisor.

Statistics bolster this hypothesis, showing that 72% of women feel that their advisor understands their risk tolerance, compared to 82% of men. Similarly, fewer women feel their knowledge of investing is understood by their adviser (75%) compared to men (86%).

As a consequence, Barclays found that women are more than twice as likely not to have a main professional adviser, at 22% compared to 9% of men).

“The financial services industry needs to overcome existing gender biases and provide women the opportunity to succeed,” the research recommended, “There is a need to break down barriers in terms of language, tone, marketing material and so forth, which are created with the male investor in mind.”

Finally, it is undeniable that despite women’s increasing wealth ownership, fewer women are currently involved in the day-to-day running of family businesses and management of family wealth.

Traditional gender roles have left women feeling ignored in the family conversations around wealth. However, these roles are breaking down. Women are increasingly seeking higher education, gender stereotyping is deteriorating, and there’s a shift with women getting more involved with family businesses and financial decision making.

According to Barclays, financial services industry professionals play a crucial part in embracing these changes by providing women with the confidence that they are truly understood and taken seriously. Current biases exist as a result of how financial services have traditionally functioned, in that it was created by male professionals for wealthy males.

“Within the industry, focus needs to be placed on breaking down these biases, providing an environment in which they are supported, and further encouraging female involvement,” the research recommended.