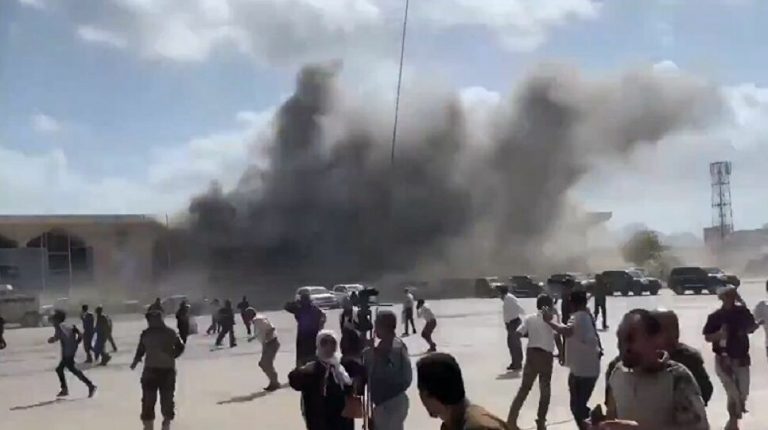 Ahmed Aboul Gheit, Secretary-General of the Arab League, condemned in the strongest terms the bombing that struck Aden Airport on Wednesday, shortly after the plane carrying members of the new Yemeni government landed in the area.

In a statement, he described the bombing as a cowardly terrorist act aimed at sabotaging the political agreement recently reached under the auspices of Riyadh, according to which the new government was formed and the rift with the Transitional Political Council in the south was healed, stressing that those behind it do not want good for Yemen and its people.

Egypt also condemned, in a statement issued by the Ministry of Foreign Affairs, the attack on Aden Airport.

Egypt reiterated its steadfast position in supporting Yemen in its struggle to restore security and stability and achieve the aspirations of the brotherly Yemeni people and confront all forms of terrorism and its supporters.

Egypt also expressed its solidarity with the brotherly Yemen, the government and the people, for this painful affliction, and it offered its sincere condolences and sympathy with the families of the victims and wishes for a speedy recovery for the injured.

Abdel Aal said, “Many innocent people were killed [in Aden attack],” stressing the importance of returning the disputing parties in Yemen to the peace path.

This came in a telegram sent by Abdel Aal to his Yemeni counterpart Saeed Sultan Al-Barkani, expressing support and sympathy for the victims.

“Such despicable criminal acts aim mainly to thwart the good efforts made by the Kingdom of Saudi Arabia to bridge the gap between the brothers,” AbdelAal added.