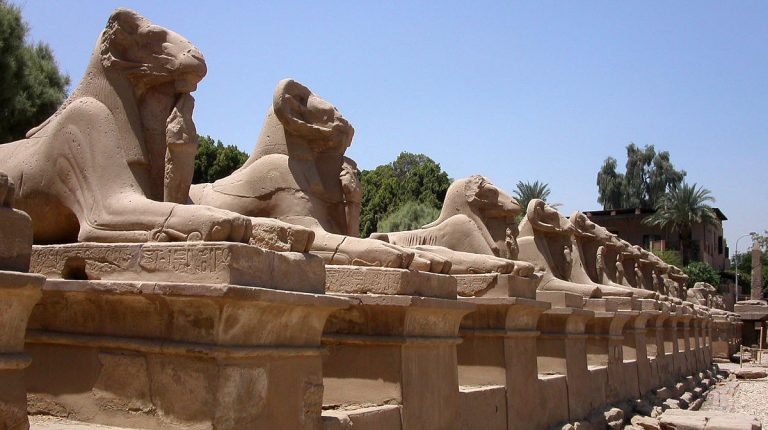 Egypt’s Minister of Tourism and Antiquities Khaled Al-Anani and Supreme Council of Antiquities Secretary-General Mostafa Waziri have inaugurated the largest renovation project to save 29 ram statues at the Karnak Temple.

After four of the statues located behind the first pylon in the temple were moved to Cairo’s Tahrir Square, it became clear that the rest of the statues had suffered significant damage.

This has been attributed to their poor transport and storage during the 1970s, when the the sound and light shows at the Karnak Temple were commenced. As a result of the finding, it was decided to restore and protect them from further damage.

In a media statement, Karnak Temple Complex Director Salah Al-Masakh said that the Ministry of Tourism and Antiquities started restoration and maintenance work on a group of statues of rams several months ago. The statues are located in the southern side of the Karnak Temple’s first courtyard, of which there had originally been 33 before the transfer of four rams to Tahrir Square.

He added that the idea of restoration depends on two axes, the first of which is to move the rams from their original resting place. This is followed by the digging of a trench, approximately 2 metres wide and 1.5 metres deep, that will be filled with gravel and sand.

The work aims to prevent groundwater from negatively affecting the sandstone statues, particularly as sandstone is particularly prone to damage caused by water and moisture in the soil.

The restoration and maintenance of the statues will be carried out by a specialised team of archaeologists, conservationists, and technicians from the Ministry of Tourism and Antiquities. They will work under the ministry’s direct supervision and in coordination with the Karnak Antiquities District. Once the conservation work is completed, the statues will be placed on a modern concrete base to ensure their preservation.