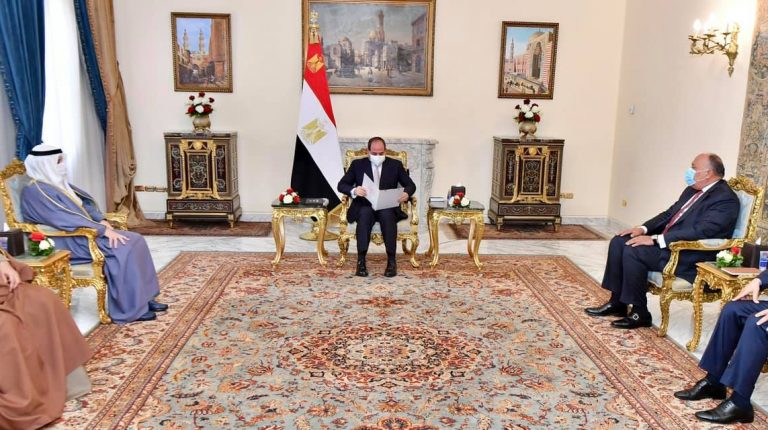 During the meeting, the Kuwaiti top diplomat handed a letter to Al-Sisi from Kuwaiti Emir Sheikh Nawaf Al-Ahmad Al-Jaber Al-Sabah, including the recent developments of Kuwaiti mediation efforts to reach reconciliation between the quartet comprising Saudi Arabia, the United Arab Emirates (UAE), Bahrain and Egypt, and Qatar, said the Egyptian presidency.

The Egyptian president “expressed his appreciation and support of the sincere Kuwaiti efforts stemming from its good intentions over the past years to achieve the desired reconciliation,” said Egyptian presidential spokesman Bassam Rady in a statement.

Al-Sisi also reiterated Egypt’s fixed principles to achieve inter-Arab reconciliation, cooperation and solidarity, including mutual respect and non-interference in other countries’ domestic affairs, according to the statement.

“It was agreed at the end of the meeting to intensify joint consultation and coordination between Egypt and Kuwait in this context during the coming period, with the aim of addressing everything that threatens the security and stability of Arab states and peoples, and preserving Arab national security,” Rady added.

In early June 2017, Saudi Arabia, the UAE, Bahrain and Egypt cut their diplomatic ties with Qatar, accusing Doha of supporting terrorism and interfering in their internal affairs.