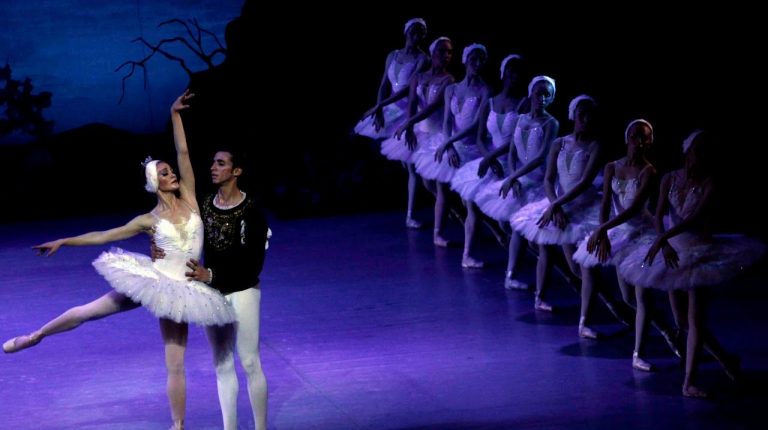 The year 2020 has been a universally tough year, with all aspects of life severely affected or completely halted due to the novel coronavirus (COVID-19) pandemic.

Of the sectors most severely affected by the global health crisis, tourism, culture, and creative sectors suffered significantly. Despite this, the Egyptian Opera House has succeeded in presenting artistic activities throughout the past year.

Despite the decision to suspend cultural and artistic activities for more than three months from March 2020, the Opera continued to carry out their enlightening message. As part of this, they presented 584 artistic and cultural events in Cairo, Alexandria, and Damanhour, with works put on to improve public taste and define the human artistic heritage.

These performances have been divided between local and foreign innovations, all of whom have played an important role in providing the young creators the opportunity to express themselves in society. The works have also been presented as a way of attracting audiences from different age groups, in addition to developing society.

In line with the state’s special orientations to revive intellectual and artistic activities, and coexist with the coronavirus, the new open air Fountain Theater at the Cairo Opera House was established. The new theatre allows for performances and art exhibitions to be presented, while taking the necessary preventive measures against the coronavirus.

Moreover, the Ministry of Culture launched an online initiative, entitled “Culture is between your hands”, which has played an important role in presenting concerts, salons, and creative activities to audiences at home.

It also organised a unique concert featuring a hologram of legendary Egyptian singer Umm Kulthum, which was a huge public success. This came in addition to its holding 584 artistic events and cultural activities in the opera theatres in Cairo, Alexandria, and Damanhour, while taking the necessary preventive measures against the coronavirus.

Cairo Opera House Chairperson, Magdy Saber, said that in the run-up to the suspension of cultural events due to the coronavirus, and as part of cultural exchange between Egypt and many foreign countries, Egypt’s opera houses hosted a number of visiting groups from abroad.

These included the Cairo Steps Ensemble (Egypt-Germany), the Fire of Georgia (the Royal Georgia Ballet), the Milan Ballet (Italy), the Heilongjiang Symphony Orchestra (China), the Tenor Quartet (Czech Republic). Events were also held to mark certain notable days, including World Hindi Day, and to commemorate the 20th anniversary of the establishment of formal relations between Egypt and Korea.

The Opera Cultural Salon continued to achieve its goals to enlighten audiences, honouring many prominent Egyptian pioneers and figures in cultural fields. The salon also presented poetry evenings and public cultural seminars at the opera theatres in Cairo, Alexandria, and Damanhour.

Saber added that, under the supervision of its artistic director and main conductor, Maestro Ahmed El-Saedy, the Cairo Symphony Orchestra celebrated the 62nd anniversary of its formation. He explained that the orchestra had performed 27 different concerts at various opera theatres all over the country, including a group of the most famous international classical musical compositions.

Meanwhile the Cairo Opera Troupe, under the supervision of its artistic director Iman Mostafa, performed Giacomo Puccini’s renowned opera Tosca, this year, in addition to 16 concerts, which included many international songs and Christmas songs.

As for Egypt’s Modern Dance Troupe, under the supervision of its artistic director Walid Awny, presented its new show Akhenaten Dust of Light. This was in addition to three shows of Serena the Mermaid, The Two Maids, and Deeper than it appears on the surface.

The Cairo Opera Orchestra, under the supervision of its artistic director Maestro Nair Nagy, presented three concerts that included excerpts from famous international songs and music. These were also accompanied by ballet and opera performances.

For the 11th year, the Cairo Opera House succeeded in renewing its exclusive and direct broadcast licence for shows by New York’s Metropolitan Opera. This has been designed to create a state of artistic and cultural interest and understanding in Egypt, and to introduce the different cultures of the world to enrich the country’s artistic life.

As part of the interest in reviving the Arab world’s musical heritage, music groups from across the region and who are affiliated with the Cairo Opera House presented 89 periodic concerts. This includes: 15 concerts by the Abdel Halim Nouira Band for Arab music; 29 by the Arab National Music Group; 10 by the Arab Heritage Music Group; 18 by the Alexandria Opera for Arab Music and Singing; 13 concerts by the religious chanting group; and four concerts by the opera children’s choir. These ran in addition to the celebrations that took place as part of the 29th edition of the Arab Music Festival.

These concerts witnessed the commemoration of the symbols and pioneers of music in Egypt and the Arab world, aiming for a revival of the Arabic music form, and preserving it from extinction.

More than 59 recitals, featuring soloists or small groups following a programme, were held by Egyptian artists in the Cairo, Alexandria, and Damanhour Opera House.

The first edition of the Dandara Festival for Music and Singing, located in Qena Governorate, was also set up as the first of its kind in southern Egypt.

On the other hand, the Supreme Council of Culture, headed by Hisham Azmy, organised a total of 381 international and local cultural activities and events over 2020.

The activities were held with the actual participation or as part of the “Culture is Between Your Hands” initiative launched by Minister of Culture Inas Abdel-Dayem. This has seen the involvement of the Supreme Council of Culture’s 24 specialised committees, in cooperation with its conference secretariat team. It also ensured continued support from intellectuals in Egypt and across the Arab world, despite the difficulties presented by the coronavirus pandemic.

The activities came as part of the implementation of the 2030 Sustainable Development Plan, and included a series of international and local forums and conferences.

The International Cultural Dialogue Forum, held five events as part of its “Culture Brings Us Closer” initiative, alongside nine events to strengthen cultural relations in cooperation with cultural entities abroad. A series of 91 seminars and evenings, including lectures and intellectual salons, also took place.

A series of online events were held with domestic and regional participation, including a series of lectures entitled “Online Culture”. The digital series included 24 events such as the “Read With Us” series which included 106 individual events. This occurred in addition to the “Everyday a Poet” series, organised by the Council’s Poetry Committee, and which saw 75 activities held.