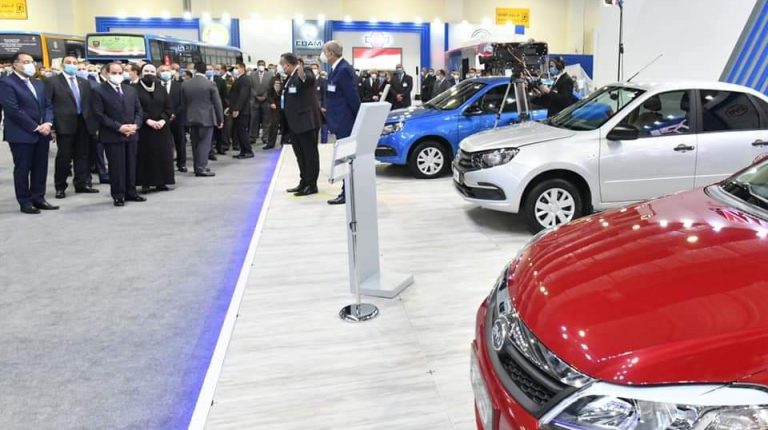 Presidency Spokesperson Bassam Rady said that the President reviewed the financing programmes available for citizens, carried out by the government to convert a vast number of vehicles to run on natural gas. Following their conversion, these cars will run on natural gas either instead of, or along with, traditional petrol.

On the sidelines of the exhibition, the President met with representatives from major international companies participating in the national initiative.

During the meeting, President Al-Sisi said that the initiative is important for its direct benefit returns for citizens, as they will be able to replace their old cars with completely new cars that work with low-cost natural gas.

The President also said that the government will offer low-interest facilities for citizens with long-term instalment programmes, to ensure that replacing old cars is less of a financial burden.

He said that Egypt has launched the initiative according to in-depth and integrated scientific research. The country will provide all the infrastructure components to serve the initiative, including stations for supplying natural gas, and vehicle service and maintenance centres.

Rady said that the meeting tackled the cooperation between auto companies that carry out local manufacturing in Egypt and government agencies within the framework of the national initiative to replace and convert vehicles to use natural gas.

The national plan aims to reduce fuel imports, decrease pollution from harmful emissions, ensure the safety of drivers and passengers, and tap into unexploited auto factories.

The exhibition, which is being held at the Egyptian International Exhibition Center (EIEC) in the Fifth Settlement district of Cairo, is set to end on 6 January. The government, as well as local and international companies specialised in the field of environmentally friendly vehicles, are set to take part.

President Al-Sisi inspected the exhibition halls that have been allocated to government authorities and institutions tasked with implementing the conversion initiative. This includes the halls allocated to the Ministries of Finance; Military Production; Trade and Industry; Petroleum and Mineral Wealth; Local Development; Environment; Interior; and Transportation.

He also inspected the Go Green Exhibition halls allocated to major international and local companies specialised in this field.

The Go Green Exhibition aims to keep companies and the public informed on the national programmes available to finance the conversion of cars to run on natural gas. It will also keep them updated on the economic and environmental benefits of expanding the use of natural gas for vehicles, Rady said.

An entire pavilion has been allocated in which ministries, banks, and insurance companies will be able to interact with citizens willing to benefit from the initiative and convert their vehicles to natural gas. The pavilion will provide those interested with all the facilities to learn more about the required procedures.

In order to preserve the environment and make use of the country’s plentiful natural gas production, the Egyptian government plans to scrap old vehicles manufactured over 20 years ago. These will be replaced with new models that can run on natural gas, with more recent models to be converted to natural gas-powered models.