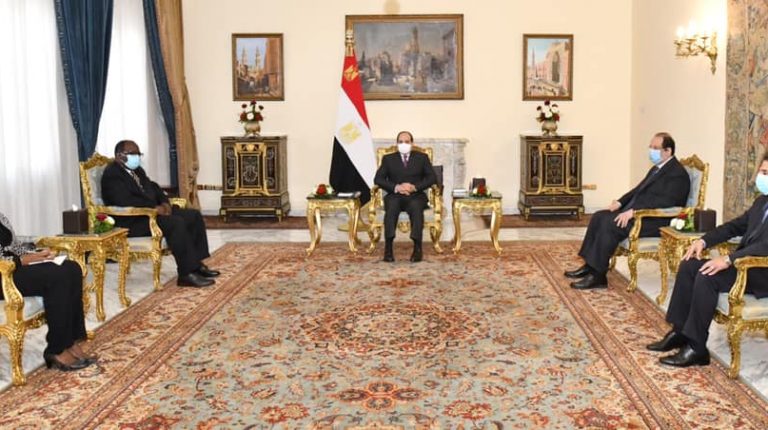 According to the presidential spokesperson Bassam Radi, the meeting tackled cooperation between Egypt and Ghana in the fields of trade and investment.

Cato stressed the historical ties linking the two countries and peoples, appreciating in this context the centrality of the Egyptian role as a fundamental pillar of stability, security and peace in the African continent.

Egypt’s President stressed the special status that Ghana enjoys with the Egyptian people, pointing to Egypt’s keenness to strengthen its relations with Ghana. He added that Egyptian-Ghanaian relations represent a model example for cooperation between African countries, to benefit their peoples.

Al-Sisi expressed confidence in the contributions of the Ghanaian President, as his country hosts the secretariat of the African Continental Free Trade Agreement (AfCFTA).

The two sides agreed to strengthen joint efforts to ensure the effective functioning of the AfCFTA and boost economic and trade integration between the countries of the continent.

During the Ghanaian struggle for independence, Kwame Nkrumah, Ghana’s first President, developed stronger ties with the Maghreb countries which later constituted the Casablanca group that supported the establishment of a single African state.

It is within this context that this paper foregrounds the intersection between Ghana and Egypt, the pioneers in African independence.
The shared political ideology between Kwame Nkrumah and the Egyptian leader Gamal Abdel Nasser set the grounds for the construction of political ties between the two states during the period of the African independence struggle and in subsequent periods on the continent.

Additionally, Nkrumah’s marriage to Fathia Nkrumah, an Egyptian woman, during the late 1950s, and other high-profile marriages between Ghanaians and Egyptians contributed to solidifying these relations. She became the First Lady of the newly independent Ghana as the wife of the Kwame.