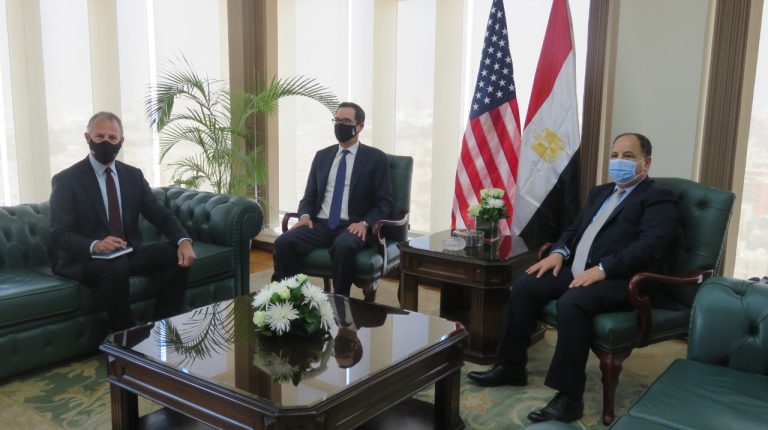 Egypt’s Minister of Finance Mohamed Maait has expressed the Egyptian government’s aspiration to maximise the investment activities of US companies in the country.

Maait said that this would ensure there would be a greater role for the US business sector in Egypt’s major development projects implemented in various parts of the country. The aim is to take advantage of the promising opportunities provided by the Egyptian economy.

The minister’s remarks came during his meeting with US Secretary of Treasury, Stephen Mnuchin, as the latter embarked on a visit to Egypt. The meeting was also attended by a delegation accompanying Mnuchin, as well as: Ehab Abo Eish, Deputy Minister of Finance for Treasury Affairs; Sherine El Sharkawy, Assistant Minister for Economic Affairs; Yomna Khattab, Assistant Minister for Financial Policies; and Doaa Hamdy, Acting Head of the External Relations Unit.

According to a Ministry of Finance statement on Wednesday, Maait told Mnuchin and his accompanying delegation that these opportunities come in light of fruitful efforts to create the legislative and institutional structure. These have been put in place to attract more foreign investments.

Maait said, “We are ready to remove any obstacles to increase the investments of American companies in Egypt, especially that Egypt is qualified to be a regional centre for the expansion of companies in the Middle East and Africa.”

The minister assured the US delegation that Egypt will continue moving towards comprehensive reform, with the aim of achieving sustainable development and improving standard of living.

He referred to the development of Egyptian-US strategic relations, within a firm framework of mutual respect and the common interests of the two friendly countries in various fields. This comes particularly on the economic level, as the US is one of Egypt’s largest trading partners.

Maait noted the Egyptian government’s keenness to enhance mutual economic cooperation, which will contribute to increasing trade and investments.

During the meeting, Maait note the importance of the international community’s concerted efforts, and the continuing joint Egypt-US cooperation to undermine the threat of terrorism, and prevent support for its organisations.

The Minister talked about the success of Egypt’s 2016-2019 economic reform programme and the reflection of that success in the Egyptian economy’s resilience in facing the novel coronavirus (COVID-19) pandemic.

He pointed out the results achieved by the Egyptian economy, which have been highlighted by some international institutions, and also to the allocations that were approved to mitigate the pandemic’s severity.

Maait said that, at the beginning of the pandemic, the government took the initiative to secure EGP 1bn for the Ministry of Health to provide the basic needs of preventive supplies.

At the beginning of the second wave, the government also initiated another EGP 1bn, bringing the total additional amounts available to support Egypt’s health sector since the start of the pandemic to EGP 14.4bn.

The minister noted the government’s keenness to support Egypt’s tourism sector to withstand the pandemic’s repercussions, and to ensure Egypt can attract global tourism in the post-pandemic era.

He mentioned that for this purpose, EGP 3.2bn was allocated during fiscal year (FY) 2020/21 to support the tourism and cultural sectors, and EGP 3.1bn for the civil aviation sector. He also said that the period from July to November 2020 witnessed a 13.8% increase in the state’s total public revenues, compared to the same period in FY 2019/20.

According to JP Morgan, Egypt is the only country in the Middle East and Africa (MEA) region that has successfully concluded the annual cycle of reviewing the credit rating, and retaining the confidence of all three international rating institutions, “Standard & Poor’s, Moody’s, and Fitch” during a period of difficulty for the global economy.

He pointed out that the sovereign evaluation and credit rating of Egypt have been fixed with a stable outlook. In its latest report, Standard & Poor’s maintained Egypt’s credit rating in both local and foreign currencies at “B”, for the second time in six months. The agency added that the outlook for the Egyptian economy is stable.

Maait said that the government entered the pandemic with a stronger position than two years ago, which confirms that it is on the right path. He noted that achieving financial and economic targets before the coronavirus crisis pushed the government to move forward towards its targets.

He added that, according to the International Monetary Fund (IMF), Egypt is the only country that will achieve positive economic growth in the Middle East and North Africa (MENA) region during the current fiscal year. The IMF expects the Egyptian economy to experience a rapid recovery in the medium term, and an increase in growth rates of more than 5%.

It also expects the total deficit rate of GDP to decline to 5.1% during FY 2022/23, and to 4.4% by FY 2024/25. This reflects the ability of Egyptian financial policies to deal positively and effectively with local and international variables, Maait said.

The Ministry of Finance statement said that Mnuchin praised the success of Egypt’s economic reform programme that he said contributed to strengthening the Egyptian economy’s structure. The US Secretary of the Treasury also said the programme helped contain the pandemic.

He also said that it is an important and unique experience that has given the Egyptian economy strength and rigidity in the face of crises and challenges, according to the statement.

Mnuchin welcomed Maait’s keenness on transferring its expertise in the field of economic reform to neighbouring countries, in a way that would contribute to laying the foundations for comprehensive and sustainable development.

He indicated that the US side is looking forward to deepening the economic partnership with Egypt, in a way that contributes to increasing his country’s investments in Egypt. The US Secretary of State highlighted that Egypt enjoys an attractive climate and strong infrastructure.

“We look forward to strengthening joint bilateral cooperation in combating money laundering operations that threaten the world’s economies, especially with these illegal operations being linked with support for terrorist organisations and other forms of organised crime,” Mnuchin said.

He added that he expects the global economic conditions to gradually improve, and predicts that the Egyptian economy will make a strong return following the roll-out of the vaccines against the coronavirus.

For his part, Ambassador Cohen stressed his country’s desire to enhance economic cooperation between the two sides, and attract more US companies and investments to expand their economic activities in the Egyptian market.

He highlighted that this would be particularly relevant given the success of the Egyptian Government’s economic reform programme in improving the investment climate.

Topics: Egypt ministry of finance US companies US investment US Secretary of Treasury USA