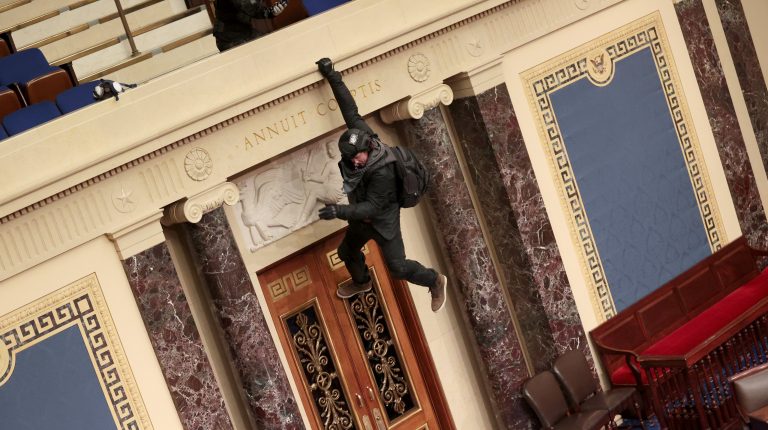 As the US Capitol was breached by protesters on Wednesday afternoon, US President-elect Joe Biden responded in a speech: “This is not dissent. It’s disorder, it’s chaos. It borders on sedition, and it must end now. I call on this mob to pull back and allow the work of democracy to go forward.”

He added “I call on President Trump to go on national television now to fulfill his oath and defend the Constitution and demand an end to this siege … It’s not protest, it’s insurrection. The world is watching.”

In response, Trump called on Capitol protesters to “go home in peace, despite election being stolen.”

The tense situation that has forced proceedings to count Electoral College votes cast in the 2020 presidential election to halt.

US Congresswoman Nancy Mace of South Carolina, tweeted out a video clip showing physical confrontation between protesters and police.
“Just evacuated my office in Cannon due to a nearby threat. Now we’re seeing protesters assaulting Capitol Police,” she wrote. “This is wrong… I’m heartbroken for our nation today.”

A woman is reportedly in critical condition after being shot in the chest on the Capitol grounds.

White House press secretary Kayleigh McEnany tweeted “the National Guard is on the way along with other federal protective services.”
Washington, D.C. Mayor Muriel Bowser on Wednesday afternoon ordered a citywide curfew in the wake of the incidents.
In a statement, Bowser said the curfew will run from 6 p.m. on Wednesday until 6 a.m. on Thursday.

In a joint statement, House Speaker Nancy Pelosi and Senate Minority Leader Chuck Schumer, top congressional Democrats, said that they are “calling on President Trump to demand that all protestors leave the U.S. Capitol and Capitol Grounds immediately.”

The entire D.C. National Guard has been activated following breach of the U.S. Capitol, according to Jonathan Hoffman, chief spokesman for the Pentagon. Virginia is also sending 200 state troopers and mobilizing a unit of the Guard to respond to the situation, a state official said.