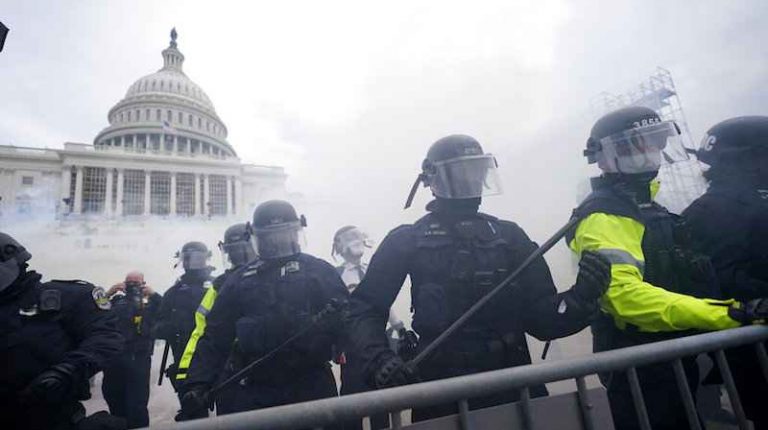 The US Capitol was breached by protesters on Wednesday afternoon, a tense situation that has forced proceedings to count Electoral College votes cast in the 2020 presidential election to halt.

Lawmakers are reportedly being evacuated from their chambers, as protesters supporting outgoing President Donald Trump, a Republican, forced their way into the building, which has been placed under a lockdown.

“All buildings within the Capitol Complex, External security threat, no entry or exit is permitted, stay away from exterior windows, doors. If outside, seek cover,” according to a message from Capitol Police.

The US Congress convened in a joint session earlier in the day to certify President-elect and Democrat Joe Biden’s victory over Trump.

U.S. Congresswoman Nancy Mace of South Carolina, tweeted out a video clip showing physical confrontation between protesters and police.
“Just evacuated my office in Cannon due to a nearby threat. Now we’re seeing protesters assaulting Capitol Police,” she wrote. “This is wrong… I’m heartbroken for our nation today.”

A woman is reportedly in critical condition after being shot in the chest on the Capitol grounds.
Trump tweeted he’s asking “everyone at the U.S. Capitol to remain peaceful.”

“No violence,” he wrote. “Respect the Law and our great men and women in Blue. Thank you!”

White House press secretary Kayleigh McEnany tweeted “the National Guard is on the way along with other federal protective services.”
Washington, D.C. Mayor Muriel Bowser on Wednesday afternoon ordered a citywide curfew in the wake of the incidents.
In a statement, Bowser said the curfew will run from 6 p.m. on Wednesday until 6 a.m. on Thursday.

“During the hours of the curfew, no person, other than persons designated by the Mayor, shall walk, bike, run, loiter, stand, or motor by car or other mode of transport upon any street, alley, park, or other public place within the District,” Bowser said.

In a joint statement, House Speaker Nancy Pelosi and Senate Minority Leader Chuck Schumer, top congressional Democrats, said that they are “calling on President Trump to demand that all protestors leave the U.S. Capitol and Capitol Grounds immediately.”

The entire D.C. National Guard has been activated following breach of the U.S. Capitol, according to Jonathan Hoffman, chief spokesman for the Pentagon. Virginia is also sending 200 state troopers and mobilizing a unit of the Guard to respond to the situation, a state official said.