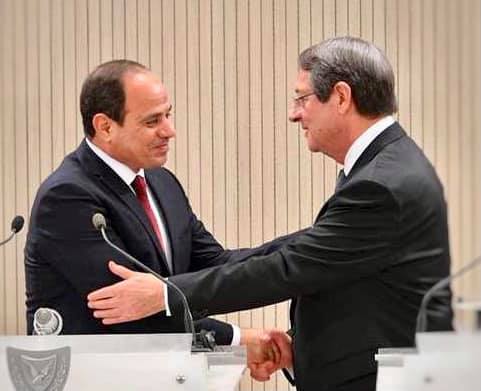 Egypt’s President Abdel Fattah Al-Sisi received, on Thursday night, a phone call from his Cypriot counterpart Nikos Anastasiades as they discussed relations between the two countries.

During the phone conversation, the two leaders also discussed the latest updates regarding regional issues of mutual concern, including cooperation on energy investment and the situation in the Eastern Mediterranean region.

For his part, Anastasiades expressed his keenness to coordinate and exchange views with President Al-Sisi on all issues of common interest, praising the strength of the relations between the two countries.

He affirmed his country’s aspiration to achieve more concrete steps aimed at consolidating the frameworks of bilateral cooperation with Egypt. This will also aim to continue strengthening the trilateral cooperation mechanism between the two countries and Greece.

President Al-Sisi expressed Egypt’s keenness on strengthening the relations with Cyprus and continuing the trilateral cooperation mechanism between Egypt, Cyprus, and Greece.