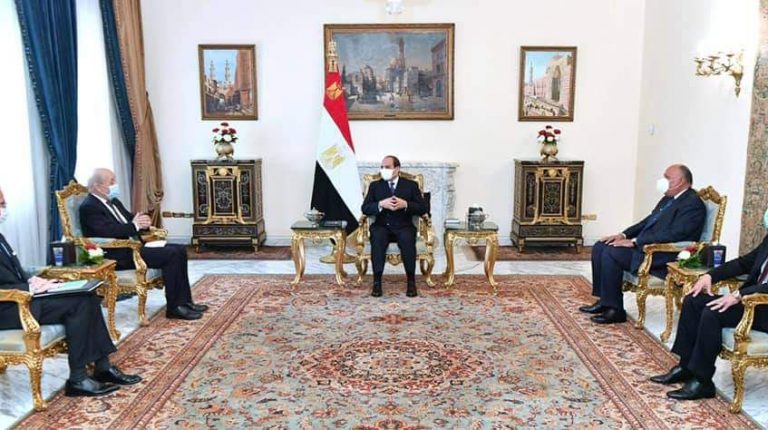 The President added that this relates particularly to railway projects and the national plan for developing villages.

Presidency Spokesperson Bassam Rady said that the meeting between the two tackled bilateral cooperation between Egypt and France, especially in the economic, commercial, military and security fields.

They have also discussed issues of common interest including regional issues of eastern Mediterranean and the African continent.

Le Drian conveyed the greetings of French President Emmanuel Macron to Al-Sisi, hailing the strong and distinguished relations between France and Egypt.

Al-Sisi requested that his own greetings be conveyed to Macron, and expressed his happiness at his last visit to France which reflected the distinguished bilateral relations between the two countries.

The Egyptian President also clarified that there is promising cultural cooperation between the two countries, in light of the opening of several major projects. These include the Grand Egyptian Museum (GEM), and the City of Arts and Culture in the New Administrative Capital (NAC).

Meanwhile, both officials discussed the regional issues of common interest, especially in the Eastern Mediterranean region, in which they agreed to continue bilateral coordination.

The two sides agreed to join efforts to consolidate the political path in order to address all aspects of the Libyan crisis. These efforts are also aimed at eliminating terrorism, preserving the state’s resources and national institutions, and limiting foreign interference.

They also discussed ways to enhance cooperation between Egypt and France in the field of combating terrorism and extremist ideology, especially in Africa’s Sahel region. It comes in addition to supporting the efforts of the Sahel region’s countries to confront the threat of terrorist group expansions.