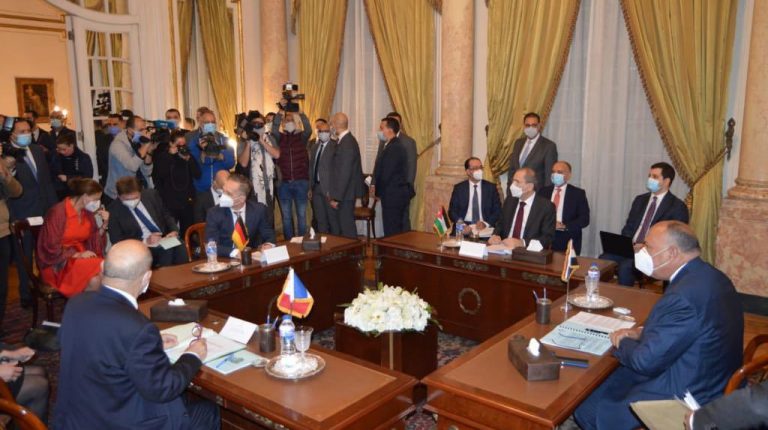 Egypt’s Minister of Foreign Affairs Sameh Shoukry met with his counterparts from France, Germany, and Jordan, on Monday, to pursue the consultation on means to advance the Middle East peace process.

The meeting, which was held in Cairo, saw the participation of France’s Jean-Yves Le Drian, Germany’s Heiko Maas, and Jordan’s Ayman Safadi, and focused on the stalled Palestinian-Israeli talks.

During the meeting, the ministers discussed their recent contacts with their Palestinian and Israeli counterparts, and the views of each party. Shoukry took the opportunity to review the notes taken from his meeting with Palestinian Minister of Foreign Affairs Riyad Al-Maliki.

The ministers called for the prompt resumption of the talks, as well as the creation of political horizons, and the restoration of hope through credible dialogue.

The ministers thanked Egypt for its efforts in organising the meeting, and decided to hold the next meeting in France. They also vowed to support Egypt’s efforts in regarding the goal of ending divisions between the Palestinians and Israelis.

The opportunity to discuss potential steps to advance dialogue between the Palestinians and the Israelis was welcomed. The ministers called upon both parties to deepen their cooperation and dialogue on the basis of further and reciprocal commitments.

They also welcomed the Palestinian Authority’s decision to restore cooperation based on Israel’s commitment to past bilateral agreements.

At the same time, the recent developments in efforts to achieve Palestinian reconciliation were highly praised, with the minister’s welcoming the Palestinian Authority’s willingness to hold upcoming elections.

Reviewing the principles agreed in their joint statement during their meeting in the Jordanian capital, Amman, last September, the ministers expressed their firm support to all efforts aimed at achieving a just and lasting peace in the Middle East. This would be based on international law, relevant United Nations Security Council resolutions, and agreed parameters, as recalled in the Arab Peace Initiative.

The ministers further emphasised that the resolution of the Palestinian-Israeli conflict on the basis of the two-state solution is an indispensable requirement to comprehensive peace in the region.

They further emphasised their commitment to a negotiated two-state solution, ensuring an independent and viable Palestinian state based on 1967 borders and the UN Security Council resolution.

The ministers emphasised the US’ role in this context, and expressed willingness to work with the latter towards facilitating negotiations. They also called on the parties to refrain from any unilateral measures that would undermine the future of a fair and lasting solution to the conflict.

They reiterated the call to implement UN Security Council resolutions to immediately and completely cease all settlement activities, including in East Jerusalem. They also agreed that the building and expansion of settlements, and confiscation of Palestinian properties, are a violation of international law that undermine the two-state solution’s viability.

The ministers noted the importance of Arab-Israeli peace treaties, including the recently signed agreements contributing to the resolution of the Palestinian-Israeli conflict on the basis of the two-state solution.

The ministers urged all parties, including the Quartet and their potential partners, to exert collective efforts, and to take practical steps to launch and sponsor credible negotiations on all final status issues in the Middle East peace process.

They also said that they highly value the indispensable role of the United Nations Relief and Works Agency for Palestine Refugees in the Near East (UNRWA) in providing humanitarian assistance and essential services to Palestinian refugees.

The ministers called upon the international community to honour its commitments to UNRWA, thereby helping the organisation overcome the present dire financial deficit.