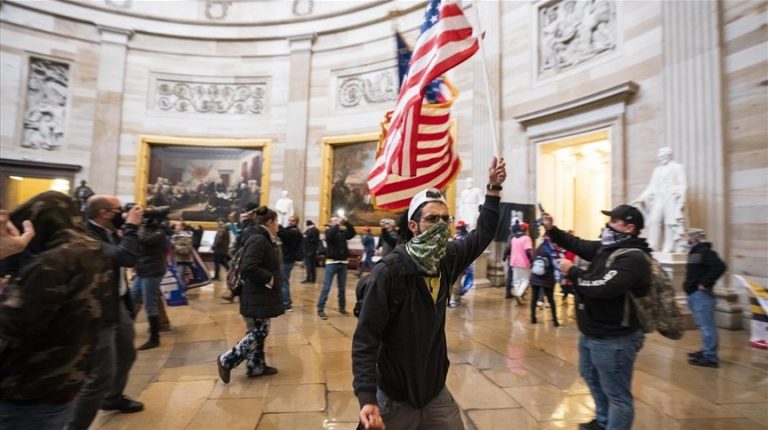 Watching the US Senate chamber overrun by flag-carrying supporters of incumbent President Donald Trump, last Wednesday, was too much for bestselling author Stephen King.

In response to what he saw, the internationally renowned author focused on the seeming lack of police intervention compared to previous protests.

Encouraged by the divisive president, a violent and overwhelmingly white crowd overpowered Capitol police and forced its way into the building. They waved flags, posed for pictures on the Senate floor, and stole items from leaders like House Speaker Nancy Pelosi.

When the storm on the Capitol was over, four people were dead, namely one woman who had been shot and three people who were left dead as a result of “medical emergencies”, DC Metropolitan Police Department Chief Robert Contee said at a press conference.

As of 9:30 pm on Wednesday, there had been roughly 52 arrests, according to DC police. Most of those were detained because they were violating the 6 pm curfew instituted by Washington’s mayor Muriel Bowser.

Singer and actress Selena Gomez laid the blame for the violence at the feet of social media companies, who she says have given a platform to hate and division. She implied the resentment stoked by Trump online, over baseless claims of election fraud.

So too comedian and actor Sacha Baron Cohen, who demanded that Facebook founder Mark Zuckerberg, YouTube CEO Susan Wojcicki, and Google and Alphabet head Sundar Pichai finally de-platform the far-right activists who have a massive presence on the social media sites.

Sarah Silverman, comedian, actor, and former Saturday Night Live regular, retweeted commentary that questioned why hundreds of billions are spent on defence, yet a few hundred right-wing activists could so easily overtake a sacred democratic institution.

Tom Morello, musician and former member of band Rage Against the Machine, provided evidence of looting in the Congress building.

Roxanne Gay, author of Bad Feminist, reiterated the common theme that black people, and by inference, Black Lives Matter (BLM) protesters, would not have been treated so lightly.

Frederick Joseph, bestselling author of The Black Friend: On Being a Better White Person, similarly contrasted the heavy policing, including teargas and rubber bullets, meted out to BLM marchers.

English actor, comedian, and director David Schneider asked what the reaction from police, and Donald Trump, would be if anti-racism protesters stormed the halls of government.

Also from the UK, writer, poet, and journalist Eleanor Penny noted that police were taking selfies with Trump supporters who had forced their way inside the US Capitol.

Daniel Newman, US actor and star of hit TV series The Walking Dead, was outraged enough to retweet the same selfie footage. However, he also shared another viral video that seemed to show police allowing the mob to pass through the security gates and enter the Capitol building.