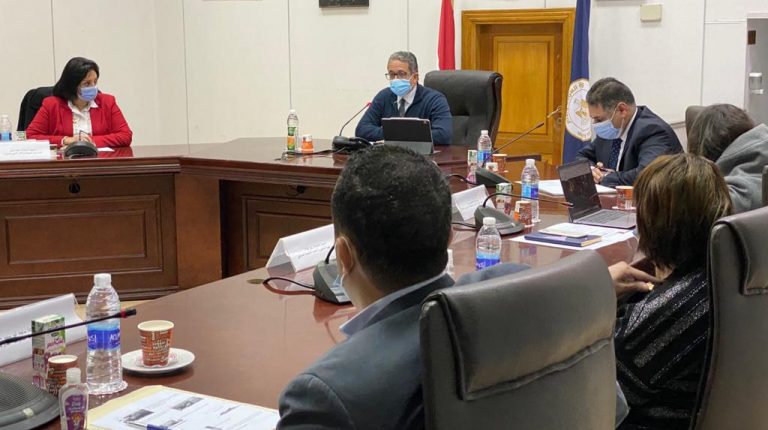 Egypt’s Minister of Tourism and Antiquities Khaled Al-Anani has held a meeting to review the plan for promoting Egyptian tourism both domestically and internationally.

The meeting was attended by members of the Promotion Committees for external exhibitions, and for internal events.

Egypt’s tourism sector is currently undertaking a range of domestic and overseas promotions, particularly with the launch of the “Enjoy your winter in Egypt” initiative to stimulate domestic tourism.

Al-Anani began the meeting by emphasising the significant role played by the two committees in promoting Egyptian tourism, both domestically and abroad. He noted the importance of ensuring these efforts are concerted in a way that contributes to highlighting Egypt’s unique tourist and archaeological potential.

During the meeting, many related topics were discussed, including developing and enriching the Egyptian General Authority for Tourism Promotion’s website. The overhaul will ensure it is more attractive to users, with the idea of encouraging tourists to visit Egypt and enjoy the country’s various tourist destinations.

The on social media campaigns under the “Enjoy your winter in Egypt” initiative, which the ministry launched in collaboration with the Ministry of Civil Aviation and the Chamber of Hotel Establishments, were also reviewed.

The initiative, which will take effect from 15 January to 28 February 2021, was set up to stimulate Egypt’s domestic tourism movement.

As part of the initiative, prices of domestic air ticket prices for Egyptians and foreigners travelling to Luxor, Aswan, Sharm El-Sheikh, Taba, Hurgahada, and Marsa Alam were also reviewed.

These tickets can now be bought at a flat rate ranging between EGP 1,500 and EGP 2,000 including taxes. This is in addition to reducing room prices at the three-, four-, and five-star hotels participating in the initiative, which will be applied as a promotion on accommodation, and which includes taxes, services and meals.

This comes in addition to the Supreme Council of Antiquities granting a 50% reduction on ticket prices for Egyptians at archaeological areas and museums in Qena, Luxor, and Aswan.

The meeting also discussed how Egypt’s hosting of the 27th edition of the 2021 Men’s World Handball Championship this month will be used to promote tourism in Egypt.

The ministry plans to host a number of international bloggers and social media influencers, with some set to visit Egypt during January.