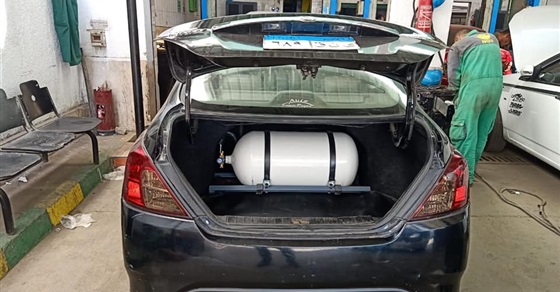 The actual steps to implement the Go Green Exhibition, which took place on 4-6 January, began with directives issued by President Abdel Fattah Al-Sisi during the opening of the Al-Asmarat project’s third phase on 12 July 2020.

The presidential directive has called for work to be undertaken to activate a national initiative to replace vehicles that have been in use for 20 years or more, and replace them with modern dual-fuel ones. The directive comes in the context of achieving nationwide sustainable development.

During a meeting with Prime Minister Mostafa Madbouly and Minister of Petroleum and Mineral Wealth Tarek El Molla at the end of 2020, President Al-Sisi issued instructions to increase the incentives for the initiative to convert aging vehicles.

The Go Green Exhibition was organised by the Ministry of Industry and Trade, with the participation of the: Ministries of Finance, Transport, Military Production, Higher Education and Scientific Research, Local Development, and Environment; the Arab Organization for Industrialization (AOI); the Micro, Small and Medium Enterprises Development Agency (MSMEDA); nine banks; as well as Gastec and Cargas.

The exhibition aimed to attract owners of vehicles that are over 20 years in age to take part in the initiative that will see old vehicles scrapped in exchange for newer vehicles. Vehicle owners will also be able to make use of financing initiatives providing loans with a 3% interest rate, and which can be repaid in instalments of up to 10 years.

Steps to apply for the initiative:

4- A photocopy of the beneficiary and guarantor’s ID card should be provided.

6- Applicants should also obtain a scrapping certificate for their old vehicle.

7- Applicants should choose a bank from which to obtain the loan.

9- The repayment period is up to 10 years, including a grace period of three months only.

Ghabbour Auto, the exclusive agent for Hyundai in Egypt, has placed the Accent and Elantra HD models within the initiative, along with the electric vehicles the Ioniq Hybrid and Kona.

The Egyptian International Automobile Company is offering the Kia Sorento model, which works on gas, and the Optima, which features both an electric engine and a petrol one.

The Nissan Sunny and Nissan Sentra were also available while Dynamics Distribution, the agent for Fiat in Egypt, offered Fiorino and Doblo and two transport trucks.

The Al-Amal Company entered the exhibition with the Lada Granta, BYD, and the King Long microbus.

Mansour introduced the MG5, Chevrolet Optra, Aveo, N300 gas van, and EZS electric car as part of the initiative, whilst Suzuki Egypt offered the DZIRE and Alto, as well as the Super Carry van.

The Natural Gas Vehicles Company (Car Gas) will establish 170 natural gas stations during 2021, at a value of about EGP 2.5bn, or a cost of EGP 15m per station. The move is aimed at keeping pace with the initiative to replace vehicles to work with clean energy.

He ruled out the possibility of replacing all cars, and asked for the implementation of a list of old luxury models and other cars that have not been damaged by the passage of the time. This would include vehicles that have a mileage of not greater than 120,000 km.

Whilst he praised the loan incentives and repayment plan, Aboul Magd demanded that the loan percentage for the provider of the new vehicles should reach EGP 120,000, instead of EGP 60,000. This would compensate citizens with a sufficient amount.

For his part, Mahmoud Hammad, head of the used car sector at the Traders Association, praised the replacement initiative and the revitalization of the modern car market.

The participating agents called for the initiative to increase the production of new cars due to the massive demand they will witness during the coming period.