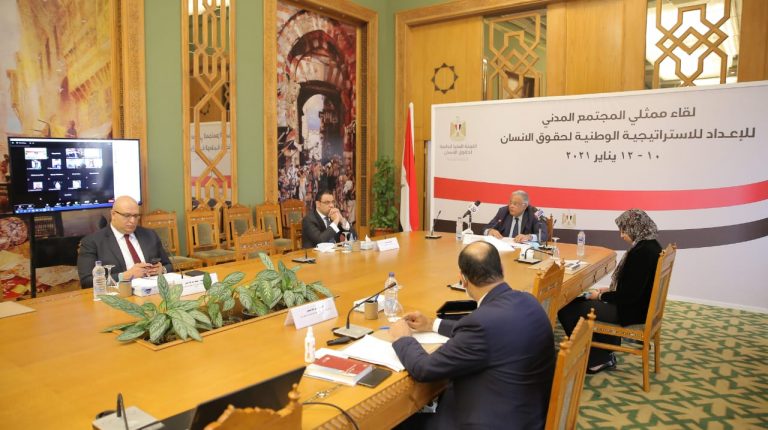 The participation of these entities confirms the SSCHR’s keenness to listen to the proposals of the various bodies and actors in a consultative framework.

The preparation of the National Human Rights Strategy comes at the forefront of the tasks entrusted to the Permanent Higher Committee for Human Rights. The committee, which is comprised of 12 ministries and national bodies, was established by a decision of the Prime Minister, and is chaired by the Minister of Foreign Affairs.

Gamal El-Din started the first session with a brief presentation on the steps for preparing the National Strategy for Human Rights and its most important paths. He added that it stems from a firmly held belief in the importance of human rights as a part of the country’s comprehensive development process aimed at building the Egyptian citizen.

He highlighted that Egypt shares the global interest in promoting human rights. At the same time, he added that Egypt, like other countries, seeks to build on what it has in terms of positives and address any challenges, pointing out that the development of human rights is a process.

Gamal El-Din also stressed that the Egyptian state is keen to open up to civil society with its various components. This is based on its firm awareness of its role as an indispensable partner for the government in serving society and achieving the development and progress it aspires to.

He said, “Egypt does not start out of a vacuum, but rather builds on its great constitutional, legal and legislative legacy and on its solid national institutions that have a long history of promoting rights and freedoms.”

During the session, Gamal El-Din addressed the steps for preparing and drafting the strategy, and the ongoing consultation plan regarding it, including meetings with the National Council for Human Rights (NCHR).

The advisory body was set up by the Supreme Committee, and is comprised of 25 Egyptian public figures and experts in the fields of law, politics and economics, and which will contribute to the process of preparing the strategy.

He referred to the most important features of the strategy and Egypt’s priorities in the field of human rights.

At the same time, Gamal El-Din highlighted that this strategy would achieve a positive momentum that will be built upon in the future through successive plans.

For their part, civil society representatives praised the state’s initiative to prepare the first national strategy for human rights. They noted that it reflects the state’s keenness to establish a framework for strategic planning in the field of human rights.

Those civil society representatives called for the speedy publication of the executive regulations of the civil labour law, so that the work of civil institutions can be organised in an easy and disciplined framework.