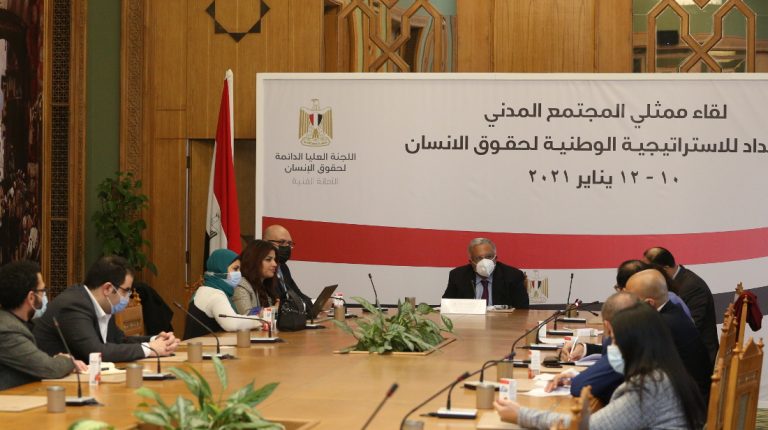 The hearings aim to maintain communication channels between the state and civil society and human rights organisations. This comes in preparation for the launch of Egypt’s first national strategy for human rights, SSCHR Secretary-General Ambassador Ahmed Ihab Gamal El-Din told reporters in a Tuesday press conference.

Gamal El-Din, who is also Assistant Minister of Foreign Affairs for Human Rights, told Daily News Egypt that the next steps would be to categorise the feedback from civil society partners, so it can be integrated into the draft national human rights strategy.

The preparation of the National Human Rights Strategy comes at the forefront of the tasks entrusted to the SSCHR. The committee, which is comprised of 12 ministries and national bodies, was established under the directives of Prime Minister Mostafa Madbouly, and is chaired by Minister of Foreign Affairs Sameh Shoukry.

Gamal El-Din stressed that human rights issues cannot be solved “at the push of the button”. He added that Egypt, like other countries, seeks to build on what it has in terms of positives, and that each country has different circumstances that may affect its implementation of reforms.

“Progress in stable countries will not be the same as others who are facing challenges, such terrorism, poverty, or any other ones,” he noted.

Gamal El-Din also stressed that human rights should not be politicised, and that Egypt “will not be blackmailed by the matter.”

He added, “Egypt does not start out of a vacuum, but rather builds on its great constitutional, legal and legislative legacy, and on its solid national institutions that have a long history of promoting rights and freedoms.”

During the session, Gamal El-Din addressed the steps for preparing and drafting the strategy, and the ongoing consultation plan regarding it, including meetings with the National Council for Human Rights (NCHR).

The advisory body was set up by the Supreme Committee, and is comprised of 25 Egyptian public figures and experts in the fields of law, politics, and economics. It will contribute to the process of preparing the strategy.

At the same time, Gamal El-Din highlighted that this strategy would achieve a positive momentum that will be built upon in the future through successive plans.

He added that even if the legislation is perfect, monitoring its implementation is the way forward to fix any violations.

In 2017, Egypt decided to reform the heavily criticised 2017 NGO law to open up the legal framework for civil society.

Recently, a court ruling dropped charges against 20 NGOS, which  is another sign of movement in Egypt’s civil society, both freezes and travel bans associated with the 20 NGOs were dropped.