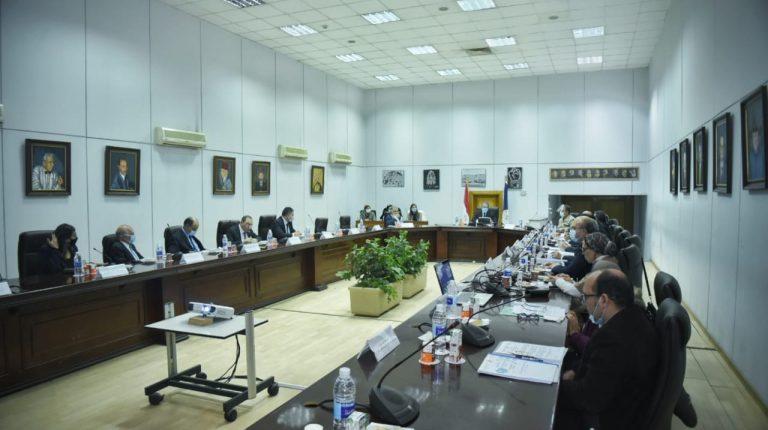 The Board of Directors at the Grand Egyptian Museum (GEM) has held its first meeting, under the chairmanship of Egypt’s Minister of Tourism and Antiquities Khaled Al-Anani.

Also present at the meeting were a group of experts in the fields of antiquities, tourism, economics, investment, management, and law. The meeting comes on the back of Prime Minister Mostafa Madbouly’s decision, in December, to form and organise the board’s work.

Al-Anani began the meeting by highlighting the importance of the museum as a cultural project and as an independent economic body. He also thanked everyone who participated in the project from its inception, extending greetings to the new members of the Board of Directors.

During the meeting, a number of important issues were discussed, most notably the approval of the museum’s budget for fiscal year (FY) 2021/22. It also approved the museum’s use of experts from Japan in various, in cooperation with the Japan International Cooperation Agency (JICA).

Atef Moftah, General Supervisor of the GEM Project, reviewed the developments in implementing the museum’s work, adding that 97% of the museum has been completed, compared to the 2016 figure of 17%.

Moftah also reviewed the development work in the area surrounding the project, including raising the efficiency of road systems around the GEM.

He also reviewed the latest developments in the negotiation and contracting process with the coalition that will provide and operate services in the museum, which will be selected in January.

Adham Al-Ganzouri, Legal Adviser for the GEM Project, discussed the legislative tools on which internal and organisational regulations will be issued. These are based on Law No 9 of 2020 regarding the reorganisation of the Grand Egyptian Museum Authority.

Al-Tayeb Abbas, Assistant Minister for Archaeological Affairs at the GEM, also reviewed the position of relocating and restoring antiquities and the museum’s displays. As part of this review, he discussed the relocation plan for antiquities to museum exhibition halls.

The Grand Egyptian Museum is the largest collection in the world of a single civilization’s artifacts, opens to the public near the pyramids of Giza.

The vast 5.2-million-square-foot museum will house more than 100,000 ancient Egyptian artifacts, including 30,000 that have never been exhibited before. Highlighted will be the entire 5,000-piece funerary collection of King Tutankhamun, including his sandals, chariot, and cheetah-skin shield – the first time in history that the full collection will be on display.