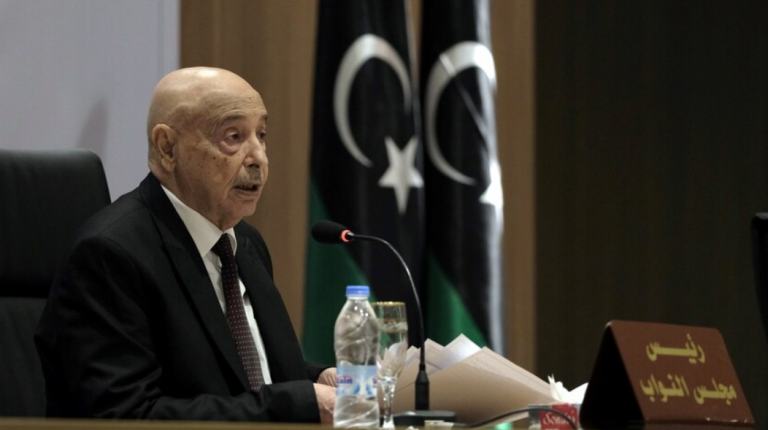 Speaker of Libya’s House of Representative, Aguila Saleh, arrived in the French capital, Paris, for an official visit on Monday, Parliamentary Spokesperson Abdallah Bleihaq has revealed.

Saleh is scheduled to meet with several French officials to discuss recent updates of political dialogue between the two countries and enhancing cooperation. The visit, which will see Saleh accompanied by an official delegation of Libyan MPs, has come upon the invitation of the French Senate.

Saleh met with French senate Speaker Gérard Larcher to discuss ways of enhancing cooperation between the two countries in a manner that serves the two peoples’ interests, Bleihaq said.

The summit saw the participation of Commander Khalifa Haftar, head of the Libyan Arab Armed Forces (LAAF), and Fayez Al-Sarraj, Prime Minister of the Government of National Accord (GNA) as well as the leaders of the rival parliamentary assemblies.

In the past few months, talks to resolve the crisis in Libya have seen progress toward a possible resolution of the long-time crisis.

In November 2020, the United Nations (UN) announced that Libya’s political parties had agreed to hold presidential and parliamentary elections in December 2021.

The holding of elections requires establishing a new and reformed Presidency Council, and ensuring an effective and unified Government of National Unity. These requirements have been outlined in the conclusion of the Berlin Conference, and adopted by UN Security Council Resolution 2510 (2020), the UN noted.

The agreement came a month after the rival Libyan parties reached a permanent and complete ceasefire agreement. It stipulates the dropping of arms, and that all military units and armed groups on the frontlines return to their camps.

It also requires that this shall be accompanied by the departure of all mercenaries and foreign fighters from Libyan territories, whether land, air or sea, within a maximum period of three months, according to the UN.

However, none of the rival parties have withdrawn forces from the frontline, as concerns have been raised over an escalation that could affect efforts aimed for settling the crisis.