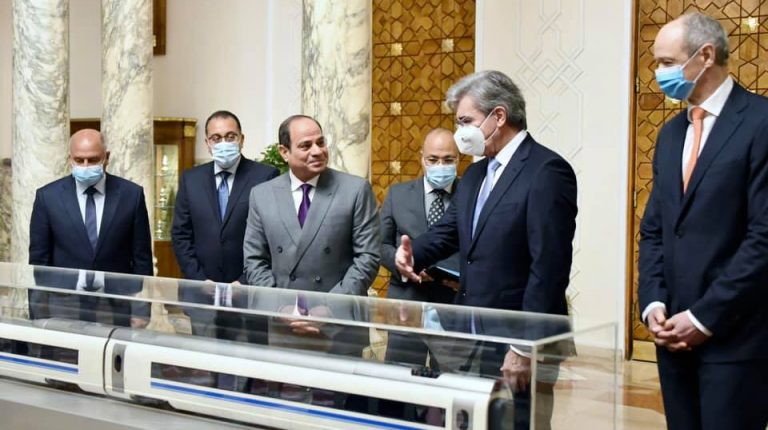 Egypt’s President Abdel Fattah ِAl-Sisi reviewed on Wednesday the final agreement on an electric high-speed rail network project. According to plans, Siemens AG will establish an integrated electric monorail system in Egypt with a total length of about 1,000 kilometres nationwide.

This came during a meeting with Chief Executive Officer of Siemens AG Joe Kaeser and Deputy CEO Roland Busch in the presence of Prime Minister Mostafa Madbouly and Transport Minister Kamel Al-Wazir.

The two-year project will be implemented with EGP 360bn ($23bn) of investments linking Ain Sokhna city with the New Alamein City, and the New Administrative Capital. The project’s first 460-km phase will connect Ain Sokhna to Alamein via the new administrative capital, featuring 15 stations and take two years to complete, according to a Wednesday Presidency statement.

The president said the new high-speed rail network will greatly benefit the transport network system in Egypt to facilitate the movement of people and trade.

The new project will link coasts of the Red and Mediterranean seas, all the way through the New administrative Capital and other major cities, Al-Sisi added.

Over the past couple of years, Egypt’s government has been working on expanding the transportation network in Greater Cairo through new buses, new underground metro lines, the new monorail, and a new electric train line, with many of these facilitating access to the New Administrative Capital set to be inaugurated next year.