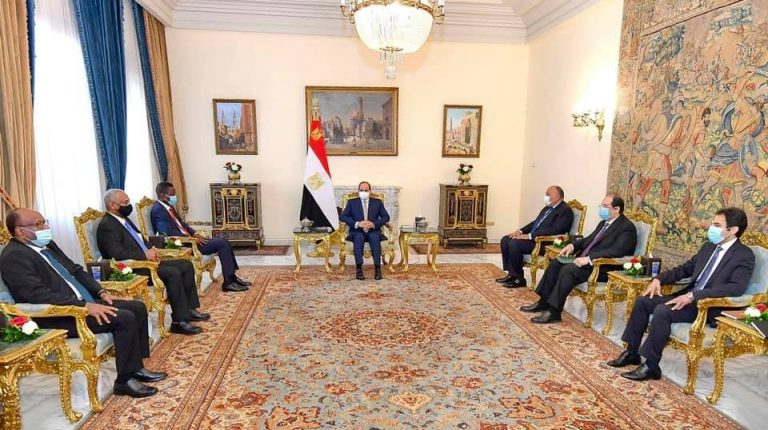 Egypt’s stance towards Sudan is based on historical relations between two countries which have never changed under any circumstances, said Egyptian President Abdel Fattah Al-Sisi in meeting with Sudan Sovereign Council member Shamseldin Kabbashi in Cairo on Thursday.

During the meeting, Al-Sisi discussed the latest developments in bilateral relations with a Sudanese delegation led by Kabashi, the Egyptian presidency announced.

The meeting also tackled the latest developments concerning the mounting tensions between Ethiopia and Sudan over the eastern border region of Al-Fashqa.

On Wednesday, Sudan’s Ministry of Foreign Affairs revealed that an Ethiopian military plane had encroached on its airspace, and warned its southerly neighbour of “serious consequences” following the incident.

The Sudanese Foreign Ministry described the incident as a dangerous and unjustified escalation which could have serious consequences and cause more tension in the border areas.

Furthermore, the ministry slammed the escalation from the Ethiopian side, and demanded that such hostilities not be repeated in the future. It highlighted their dangerous repercussions on the future of bilateral relations between the two countries, and on security and stability in the Horn of Africa.

Also on Wednesday, the Sudan Border Commission said that Ethiopia wants to force Khartoum to accept the status quo, and has not adhered to the 1972 boundary agreement.

The head of the Sudanese National Border Commission, Moaz Tengu told “Alintibaha”  newspaper that ” if Ethiopia did not uphold the 1902 border agreement with Sudan, then Benishangul-Gumuz is a Sudanese region.”

The Commission confirmed that Ethiopia’s ambitions reached the point of establishing infrastructure projects in the Fashaqa area. The latter has also established settlements inside Sudanese territory, adding that Ethiopian encroachments on the lands of Sudan began in 1957.

It also indicated that the demarcation of the border with Ethiopia is old and goes back to the days of the British Mandate.

Also on Wednesday, Fayez Al-Selik, media adviser to Sudanese Prime Minister Abdallah Hamdouk, said that the borders with Ethiopia are well-known and lack nothing but signs.

Ethiopian forces and militias continued their assault on the Sudanese border areas, which saw five women and a child killed in an attack launched by Ethiopian militias on the state of Al-Qadarif in eastern Sudan last Monday.

Al-Qadarif hosts tens of thousands of Ethiopian refugees who fled the conflict in their country’s northern Tigray region, after the military operation launched by the Ethiopian army against the Tigray People’s Liberation Army (TPLF). The operation killed hundreds on both sides, and caused a major crisis in the region, which lies adjacent to Al-Qadarif.