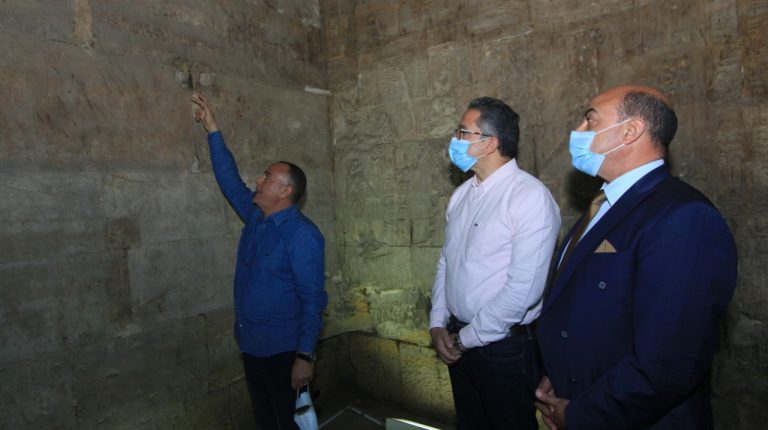 Egypt’s Minister of Tourism and Antiquities Khaled Al-Anani joined the Aswan Governor, Ashraf Attia, to inaugurate the Temple of Isis in the governorate.

The inauguration comes after the temple’s restoration and the completion of developments to make its tourism services more efficient.

The Minister and the Governor listened to a detailed explanation from Iman Zidan, Assistant Minister for the Development of Museums and Archaeological Sites, on what has been done to develop tourism services at the temple.

She said that explanatory and guiding panels, as well as a map of the governorate’s tourist destinations, have been placed around the site, along with panels detailing precautionary measures against the novel coronavirus (COVID-19).

A dual English-Arabic leaflet on the temple is also now available, with a QR code available to transfer the visitor to the Temple of Isis’s page on the Ministry of Tourism and Antiquities’ website. Once on the page, visitors will be able to access more information and photos.

Waziri said that the temple’s restoration work included restoring the floors and columns, cleaning the walls of animal waste, and placing wire windows to prevent birds from entering.

During the inauguration, Al-Anani thanked the archaeologists and restorers for their great effort in restoring the Temple of Isis, and developing and raising its tourism services.

He also thanked all Egyptian archaeologists and restorers for their dedication, and their ongoing efforts despite the difficult circumstances caused by the global health crisis.

The minister highlighted the many noteworthy archaeological discoveries in recent months, in addition to the opening of a large number of important and major archaeological tourism projects. These include the establishment and development of museums and the restoration of archaeological sites in various governorates.

This opening is part of the minister’s visit to Aswan to launch the “Enjoy Winter in Egypt” initiative, which was inaugurated on Friday from Aswan, the southernmost city in Upper Egypt. The initiative’s launch also coincides with the celebrations to mark the 50th anniversary of the Aswan High Dam’s construction.

During the visit, Al-Anani visited the Nubian Museum, where he met with tourists from Brazil and the USA. The tourists noted their happiness at visiting Egypt, especially Aswan, where they are enjoying its warm weather as well as visiting its monuments.

They added that Egypt is safe to visit thanks to the precautionary measures and hygiene safety regulations applied at airports, hotels, restaurants, museums and archaeological sites.

The Minister also met with the owners of traditional crafts stores in Aswan, who were keen to talk to him and showcase their brightly coloured heritage handicrafts that Aswan is famed for.

He made sure that his first tour of the city began with a visit to the old market to meet with owners of bazaars, and listen to their problems and the challenges they face.