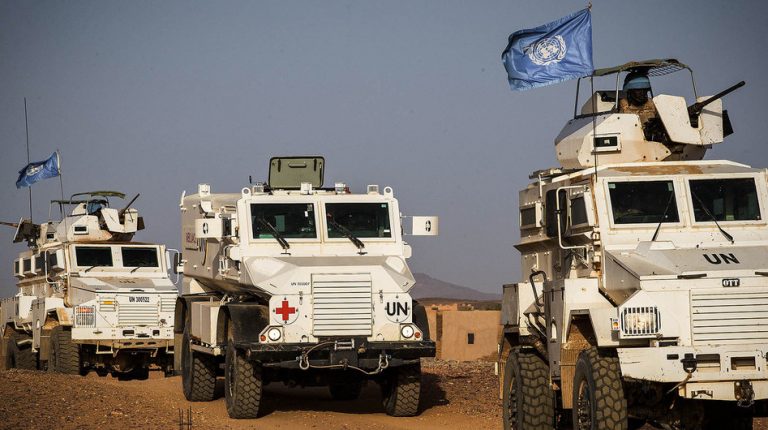 The UN Secretary-General António Guterres has strongly condemned another fatal attack carried out against a peacekeeping convoy in Mali, that left a ‘blue helmet’ from Egypt dead, and another seriously injured on Friday.

An explosive device (IED) detonated under a truck that was part of a logistics convoy from the UN Stabilization Mission in the country, MINUSMA, at around 3pm in the vicinity of Tessalit, in the Kidal region, the mission announced.

“The Secretary-General expresses his deepest condolences to the bereaved family, as well as to the people and Government of Egypt”, said the UN Spokesperson’s office. “He wishes a speedy and full recovery to the injured peacekeeper.”

The Malian Government has been seeking to restore stability and rebuild following a series of setbacks since early 2012 that fractured the country, including a failed coup d’état, renewed fighting between Government forces and Tuareg rebels, and the short-lived seizure of its northern territory by radical extremists.

The weakening of central institutions, loss of confidence in political actors and the rise of religious leaders demanding change, were among the factors leading up to a military coup in Mali last August.
Only this week, the Security Council met to consider the transition towards fresh elections, where Annadif told ambassadors that it was “never too late to reach a minimum consensus on the essentials of peace and stability, because the future of Mali is at stake.”

It has been a deadly week for those serving in what is the world’s most dangerous peacekeeping operation. On Wednesday, four blue helmets from Côte d’Ivoire were killed when their convoy was struck by an IED, in the vast Timbuktu region of the restive northwest African nation.

A robust response by the peacekeepers forced the unidentified attackers to flee, and the wounded personnel were evacuated by helicopter, MINUSMA said in a news release.

War crimes warning
UN Chief Guterres emphasized in his message released on Saturday following the latest attack by unknown perpetrators that attacks against peacekeepers “may constitute a war crime. The United Nations will spare no efforts in supporting the Malian authorities in identifying and promptly bringing to justice the perpetrators of this heinous attack.”

He reaffirmed the UN’s solidarity with the people and Government of Mali.

In a press release issued by MINUSMA on Saturday, mission head Mahamat Saleh Annadif said he had “learned with dismay of the explosive device attack”, reporting that the Egyptian peacekeeper had succumbed to his injuries during his medical evacuation. “The second is currently receiving appropriate care”, he said adding that while securing the site, “another explosive device was detected and then neutralized near the site of the explosion.

Blue helmet ‘died for peace’
UN Special Representative Annadif said he condemned any militant operation aimed at “paralyzing MINUSMA operations on the ground and indiscriminately affecting the personnel of the United Nations, its partners, or innocent civilians.”

He paid tribute to the Egyptian peacekeeper, noting that he had “died for peace in Mali in the accomplishment of his mission” and offered condolences to Egypt, his family, and brothers in arms. He assured all serving in MINUSMA of his full support, “in this painful ordeal.”

He also wished the injured blue helmet a speedy and complete recovery.

At least 70 civilians killed in attack in Niger