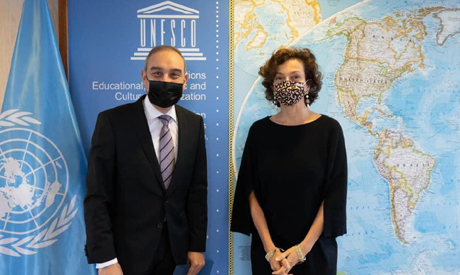 The ceremony for presenting the credentials was held last week, and was followed by a meeting with Azoulay, during which means of strengthening bilateral relations between Egypt and the organisation in various fields of its work were discussed.

This comes in light of Egypt’s current membership on the organisation’s executive council and the World Heritage Committee.

The talks also tackled means of enhancing the role of UNESCO’s regional office in Cairo, which was the first external office to be established by the organisation outside its headquarters in Paris.

During the meeting, Youssef reviewed the national efforts made in the fields of education, science, and culture. He also looked at the programme launched by the Egyptian Government to reform the country’s primary education system, which has contributed to mitigating the effects of the novel coronavirus (COVID-19) pandemic.

He also reviewed the ongoing preparations for the opening of the new Grand Egyptian Museum (GEM), as well as the launch of new cooperation projects between Egypt and UNESCO.

Youssef praised the organisation’s efforts to support member states in the fields of education, culture, and science, and its recently launched initiatives particularly the International Campaign to Combat Illicit Trade in Cultural Property and the International Education Alliance.

Azoulay praised Egypt’s active role in the organisation, as well as the role the country played during her tenure as Chairperson of the sub-committee for the UNESCO Convention for the Prohibition and Prevention of the Illicit Import and Transfer of Ownership of Cultural Property.

She also applauded Egypt’s active participation in drafting the international recommendation on the ethical aspects of artificial intelligence.