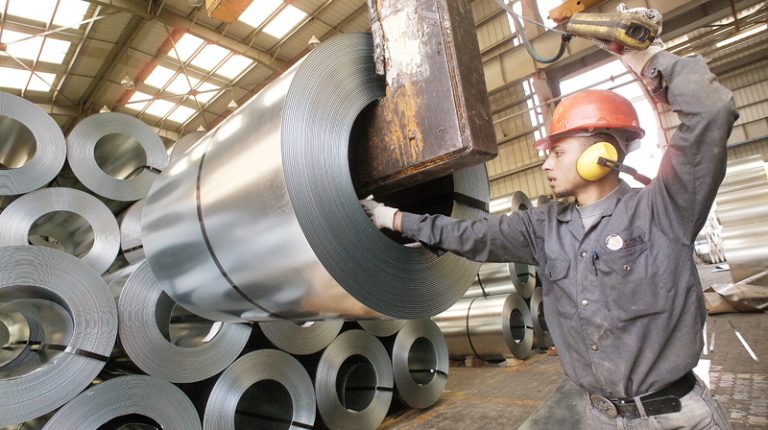 Dozens of workers at the Egyptian Iron and Steel Company (Hadisolb) staged a protest in Helwan, on Sunday, to demonstrate against the government decision to shut down the company.

The workers’ demands include an immediate halt of the government’s decisions. Around 2,000 workers are currently participating in the sit-in.

“We are here peacefully to express that we want an independent parliamentary investigation to understand why such a decision has been made,” one of the protesting workers told Daily News Egypt.

The workers vowed to keep production going and not disturb shift rotations at the 67-year-old company. They also demanded an investigation into allegations of corruption in the company, keeping in minds its abilities and the expertise of its workers.

Responding to the crisis, Minister of Public Enterprises Sector Hisham Tawfik said in a televised interview, on Saturday, that the Iron and Steel Company’s losses had been increasing over the last 23 years.

“There is no alternative but to shut the company down,” Tawfik said, adding that although the factories affiliated with the company will be shut down, the mines will continue to operate as usual.

The Ministry of Public Enterprises Sector has published several lengthy statements justifying the closure, and noted that the losses for fiscal year (FY) 2018/19 and FY 2019/20 reached EGP 1.5bn and EGP 1bn, respectively.

The company was established in 1954, and employs around 14,000 workers but is currently operating at a loss, according to several governmental statements made since 2013. A statement by the Ministry of Public Enterprises Sector said the company has incurred EGP 9bn worth of losses.

On Sunday, the Egyptian cabinet also issued a statement defending the closure. It said that the Iron and Steel workers’ social and economic rights are protected according to the law, and that the government has announced, on more than one occasion, that the decisions first take into account their rights.

The Cabinet also denied allegations of foul play when taking the decision to liquidate the company.

“The sale and liquidation procedures are governed by the law, and are supervised by supervisory bodies headed by the Central Auditing Organization (CAO),” the Cabinet said.

In a statement on Sunday, independent labour organisation, the Center for Trade Union and Workers’ Services (CTUWS), said that it would be starting an initiative to assist in rescuing the company.

“Saving and developing the company is not impossible, but it will be a process that needs determination and rational management,” the CTUWS added.

The decision to shut down the company, which has remained a pillar of support for several public sector projects established in the 1950s, has caused uproar in civil society, labour and partisan circles, as well as on social media. Several leftist and liberal parties have also denounced the decision.

The fury over the closure of the company’s factories did not stop at circles of independent parties and activists, but also reached state affiliated labour organisations and unions known for its close ties with the state.

The state affiliated Egyptian Trade Union Federation (ETUF) rejected the government’s decision, and is expected to meet with worker representatives, and those of other syndicates, to look into ways of returning to the negotiations table.

Similarly, Shabaan Khalifa, head of the Private Sector Workers Syndicate said in a statement that the government owes an explanation to the “negative decision”. He also said that it will result in the further economic deterioration of Egypt’s middle class.

Khalifa added that around 7,500 families will be affected, explaining that the government chose shutting the factories down as the easier options.

“Other options could have been discussed such as cooperation with the private sector or others,” he added.

The labour leader said that “destiny and the financial rights of the 7,500 workers should be the top of the cabinet’s top agenda”.

The labour community in the newly formed parliament seemed to lean towards the government’s decision. It asserted that shutting down the Iron and Steel company should be looked into not from a ‘romanticised point of view’, but rather from a realistic one ‘looking into the losses of the company’.

Member of Parliament (MP) Mostafa Bakry also described the government’s decision as “unfair”, adding that parliament will question the government over its lack of attempts to develop the company.