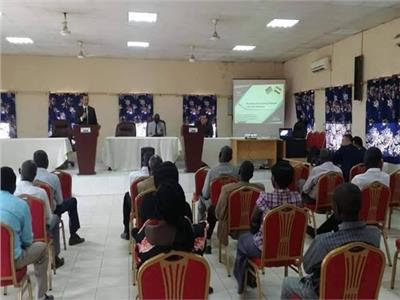 Egypt’s Ambassador to South Sudan Mohamed Kadah launched a training workshop in the country’s capital Juba, on Monday, to highlight the investment opportunities in the country.

During the workshop, Kadah addressed the role of investment in economic development, and called on the South Sudanese people to exploit these opportunities to raise their standard of living.

The workshop comes as part of Egypt’s keenness to boost the development process in the neighbouring country.

The workshop was organised by the General Authority for Investment and Free Zones (GAFI), in coordination with Egypt’s Ministry of Foreign Affairs and South Sudan’s Ministry of Investment.

In a speech at the event, Kadah addressed the role of investment in economic development, referring to the investment opportunities available in South Sudan. He also highlighted the importance of taking advantage of these opportunities to reap the dividends of peace, and raise quality of life

For his part, South Sudan’s Undersecretary for the Ministry of Investment Abraham Moamer expressed his appreciation for Egypt’s efforts in organising the workshop. He called on the trainees to benefit from Egyptian experiences in the field of investment.

Egypt has significantly assisted South Sudan in its development process, providing support in various fields, of which the health and education sectors were most important.

In late November 2020, Egypt’s President Abdel Fattah Al-Sisi travelled to Juba, where he met with his South Sudanese counterpart Salva Kiir. During the Egyptian President’s visit, the two sides discussed boosting relations between the two countries, and the implementation of the peace agreement in South Sudan to achieve stability, development and prosperity.

He also met with South Sudan’s Vice President Riek Macha, and exchanged viewpoints on Cairo’s support to the efforts exerted in implementing peace agreement terms aiming at stability in the country.

Egypt Ventures to expand investments by EGP 62m over 2020