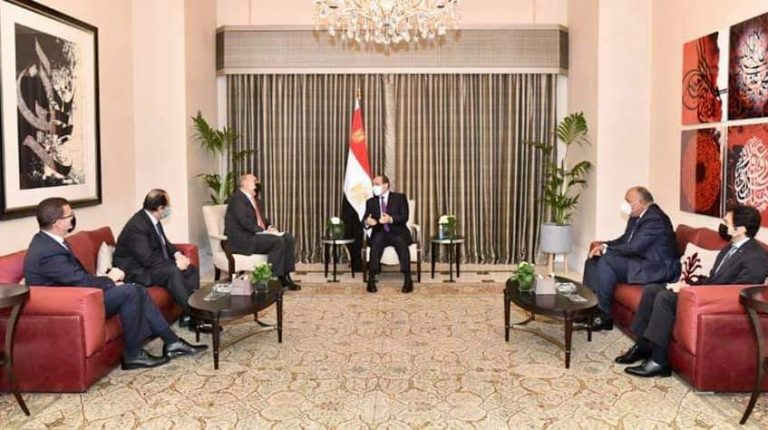 Egypt’s President Abdel Fattah Al-Sisi on Tuesday asserted that his country aspires to strengthen its cooperation with Jordan to achieve the interests of the two countries.

Al-Sisi noted that this cooperation would particularly take place at the economic and commercial levels, as part of the tripartite cooperation mechanism with Iraq.

The Egyptian President’s remarks came during his meeting with the Jordanian Prime Minister, Bishr Al-Khasawneh, on the side lines of his current visit to Amman, according to Egyptian Presidency Spokesperson Bassam Rady.

At the outset of the meeting, President Al-Sisi expressed his appreciation for the warm reception and hospitality that he received in Jordan, and lauded the strong fraternal ties between Cairo and Amman.

He also hailed the efforts exerted by the Jordanian government to safeguard and protect the Egyptian community in Jordan.

For his part, Al-Khasawneh welcomed President Al-Sisi, and praised the historic and deep relations between both countries.

Moreover, the Jordanian Prime Minister applauded the comprehensive development steps and major national projects being implemented in Egypt. Al-Khasawneh stressed his country’s aspiration to benefit from Egypt’s development efforts, through the exchange of experiences and joint investment.

The two sides also discussed ways to boost bilateral relations in various fields, as well as the latest regional and international issues of common interest. These included ways of promoting trade exchange, as well as cooperation between the medical authorities in both countries, in order to combat the novel coronavirus (COVID-19) pandemic.

During the meeting, Al-Sisi and Al-Khasawneh agreed to enhance coordination to combat terrorism and extremist ideology, as well as exchange expertise and information to face the challenges posed by them.