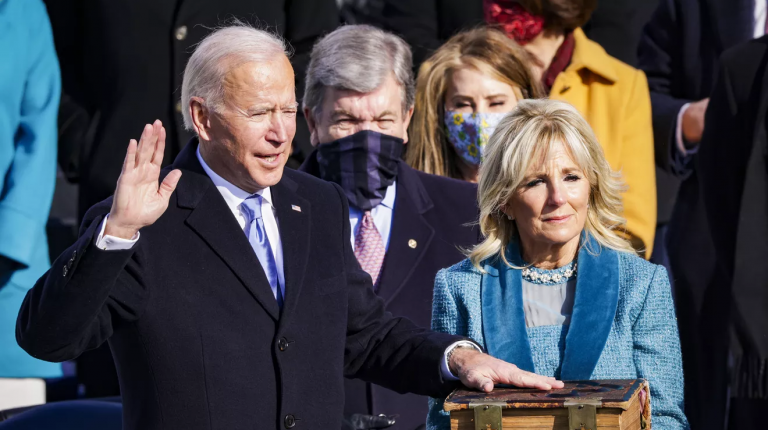 Joe Biden was sworn in as the 46th President of the United States, taking the reins of power at a perilous time in the American history.

“This is America’s day. This is democracy’s day,” Biden said in his inaugural speech.

Biden added that the country had learned that democracy is precious and fragile, yet it prevailed.

He addressed the nation minutes after Vice President Kamala Harris was first sworn in, making history as the first woman and person of color to become second in line to the presidency.

Biden has assumed power in critical time for the US, as tremendous upheaval and division rocked the country, fueled both by his predecessor and the coronavirus pandemic that has claimed the lives of more than 400,000 Americans.

What does it mean for Egypt?


A special relationship between Egypt and the United States has been established in the wake of the 1973 war, as a result of late Egyptian president Anwar Al-Sadat’s decision to gradually shift from the Soviet camp, sign the 1979 Camp David peace treaty with Israel, and establish stronger ties with Washington in return for various kinds of support, whether economic, military, or political.

However, what was once a symbolic alliance, gradually deteriorated over the time, to a mere transactional relationship where the US provides Egypt with $1.3bn in military assistance, and $250m of economic aid.

After eight years of tension, US President Obama visited Cairo in 2009 heading a US delegation where he delivered a famous speech from Cairo University to the Muslim world.
In 2013, following the ousting of former president Mohamed Morsi, Obama’s Administration decided to suspend the $1.3bn of military aid to Egypt and hold the delivery of ten Apache helicopters, in a step which wasI opposed by Israel and the American Israel Public Affairs Committee (AIPAC). Washington decided to deliver the Apaches in 2014, and to fully restore military aid in 2015.

In June 2014, Obama phoned President Abdel Fattah Al-Sisi to congratulate him for being sworn in as Egypt’s new president for the coming four years.
The outgoing US President Donald Trump hosted his Egyptian counterpart Al-Sisi at the White House on 9 April for talks on strengthening their strategic partnership and sharing views about priorities in the Middle East region.

As Joe Biden assumes power, a new chapter of Egyptian-American relations will start. Egyptian-US coordination has always been standing in all issues of the region, especially in the Palestinian issue and the situation in Syria, Sudan, Iraq, and Iran, as well as combating terrorism.

Economic ties stronger than ever

Egypt’s trade and investment relationship with the United States has deepened over the last thirty years. Since that time, the two countries have sought ways to increase their economic and trade ties, notably through various partnerships and agreements. At the beginning of the 1990s, negotiations for a free trade agreement were a topic of discussion, but no comprehensive conclusions could be reached. Egypt and the US finalised a Trade and Investment Framework Agreement (TIFA) in 1999.

During the first four months of 2020, Egyptian exports to the US under QIZ recorded $277.1m, down from $329.4m during the same period last year, according to the QIZ unit at Egypt’s Ministry of Trade and Industry.