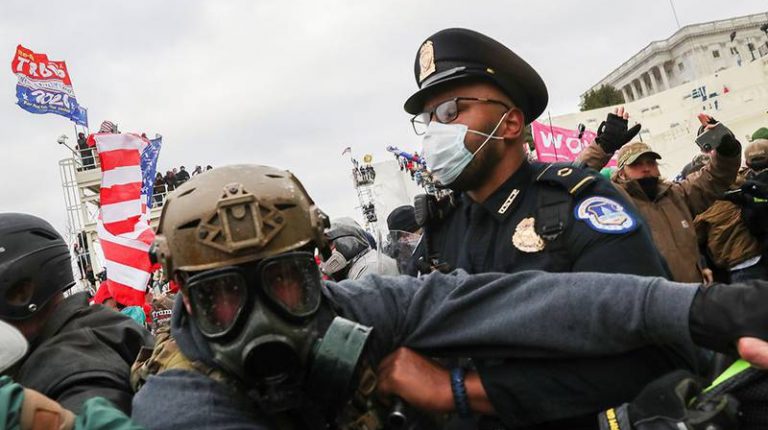 The development of the situation in the wake of the recent attack on the US Congress, the continuing violent demonstrations, the declaration of a state of emergency in Washington, D.C. until the inauguration of Joe Biden, and the deployment of security forces on the streets prove to the whole world the fragility of the democratic system in the US.

As a result of the events of 11 September 2001, the US concluded that the absence of democracy and the violation of human rights in the Middle East were among the most important causes of the increase in terrorism in the world.

It prompted the US to try to impose its vision of democracy on the Middle East, to avoid any threat to its security and interests. Consequently, the spread of democracy and respect for human rights in the Middle East, especially the Arab world, has become one of the stated goals of American policy in the region.

Thus, the US led the agenda of rehabilitating the Arab world within the framework of the so-called Greater Middle East Project for political, economic, and social reform. It relied on an interventionist policy based on focusing on the internal conditions of Arab countries, linking extremism and violence to Lack of political freedoms, low levels of education, and an absence of human rights and women’s rights.

The US promoted these ideas before and after its invasion of Iraq, claiming that it was seeking to establish a democratic system in Iraq that could represent a model for the rest of the region’s countries.

However, Iraq, as a model on the American way, has not in any way become a democratic country with its citizens enjoying human rights, but rather has become a model for remnants of destruction.

Despite the passage of nearly two decades, the US has not been able to achieve democracy in Iraq, as the country still suffers from terrorism, corruption, sectarianism, and international and regional ambitions.

The situation in Iraq, at present, has deteriorated notably due to several issues, the most important of which is Iran’s domination of Iraqi affairs, through parties loyal to its affiliated factions. The Iraqi street has also rejected the political process that has proven to be failed and futile.

In general, the Iraqi state is out of control in light of sectarian and political conflicts. Moreover, American-style democracy created a state of division between the spectrums of society and strengthened sectarian violence in Iraq.

This is in addition to the destruction of the civilizational heritage of Iraq, one of the most ancient civilisations in the world, during the American war to spread democracy in Iraq. It has resulted in the theft of thousands of artefacts which tell the story of the Mesopotamian civilisation from its inception, through Islamic civilisations until the Ottoman era. And most importantly, it has seen many ancient cities, such as Babylon and Samra, converted into military barracks.

In short, these are the results of American democracy in Iraq that reinforces division between peoples, spreads violence, and racism, and we see this today, clearly and vividly in the US itself.

If you want to know more about the destructive effects of American democracy in Iraq, you need only watch the theatre shows of the oppressed in Iraq, which flourished in the country in the aftermath of the invasion in many provinces until it became a major form of art there.

The theatre of the oppressed differs from classical theatre. The audience plays the main role in completing the events of the play and devising solutions to the problems presented.

The Theatre of the Oppressed, a kind of modern theatre school, was introduced to the world by the Brazilian director Augusto Boal, who was influenced by the work of the educator and theorist Paulo Freire.

The most important characteristic of the theatre of the oppressed in Iraq is that it allows the Iraqi citizen to tell his suffering realistically. This type of theatre does not present the vision of a director or author, but rather focuses on the vision of the simple man in the street.

I believe that the time has come for the US to end its tutelage over the countries of the Middle East, and to admit that it has brought nothing but devastation to the region.

Most importantly, the US must admit that it has many internal problems, such as racism and excessive police violence against African-Americans, Mexicans, and Arabs. I think that the American administration must develop solutions to these problems before it interferes in the affairs of the Middle East.

And most importantly, the US administration must provide democracy to all its citizens alike without discrimination based on colour and race before trying to promote its vision of democracy in the world.

Dr Marwa El-Shinawy, PhD in American Theatre, and member of the Higher Committee for the Cairo International Festival for Contemporary and Experimental Theatre (CIFCET)