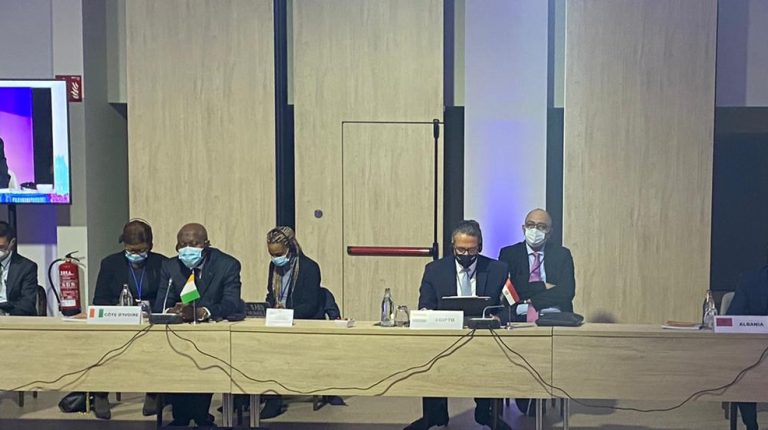 The event took place in the Spanish capital, Madrid, on 18-19 January, and was attended, by Spain’s Prime Minister Pedro Sánchez, and Tourism Ministers and officials from over 30 countries.

Also in attendance were members of the UNWTO’s Executive Council, Egypt’s Ambassador in Madrid Omar Selim, and a number of representatives from the Egyptian Embassy.

Prime Minister Sanchez delivered a speech in which he welcomed the attendees and reviewed the support given by the Spanish government to the tourism sector, and the initiatives it has undertaken to protect the sector’s workers.

Whilst noting that the sector represents 12% of the country’s national income, Sanchez added that it serves as an important component of Spanish identity.

He also stressed that whilst the novel coronavirus (COVID-19) pandemic has affected the global tourism sector, the world will overcome the crisis, as it has done with many previous crises. He also expressed his conviction that the world will come out of the crisis stronger, and noted that he hoped 2021 will be the year of recovery.

Sanchez urged the attendees to be more ambitious, and to work together to advance the tourism sector. He reviewed the strategy that Spain has adopted to restore tourism and ensure its recovery, and called on the UNWTO to promote comprehensive, green and sustainable tourism.

He concluded his speech by emphasising the importance of tourism to humanity as it is a means of communication between peoples and the promotion of tolerance and human values.

UNWTO Secretary-General Zurab Pololikashvili gave an overview of the current status, trends and prospects of international tourism, and expectations for 2021 and beyond. This was framed in terms of the coronavirus crisis, which saw international tourist arrival numbers plunge by 70% in the first eight months of 2020 compared to the same period in the previous year.

He also updated the Executive Council’s member representatives on the latest developments regarding the UNWTO’s work programme and its plans for 2021.

Pololikashvili presented a report on the organisation’s activities and its achievements in the period from July to December 2020, in the midst of global travel restrictions. The latter included the complete closure of many borders to contain the virus, which led to an 81% and 79% decrease in arrivals during July and August, respectively. It is noteworthy that these two months are normally the busiest tourism months of the year, and the peak of the summer season.

He said that despite these large declines, this represents a relative improvement compared to 90% or more in declines recorded in the previous months. This was due to some destinations beginning to reopen their doors to international tourism, most of them in the European Union (EU).

This trend is expected to reverse from October onwards due to renewed lockdown measures in several European countries and ongoing border closures in Asia and the Pacific.