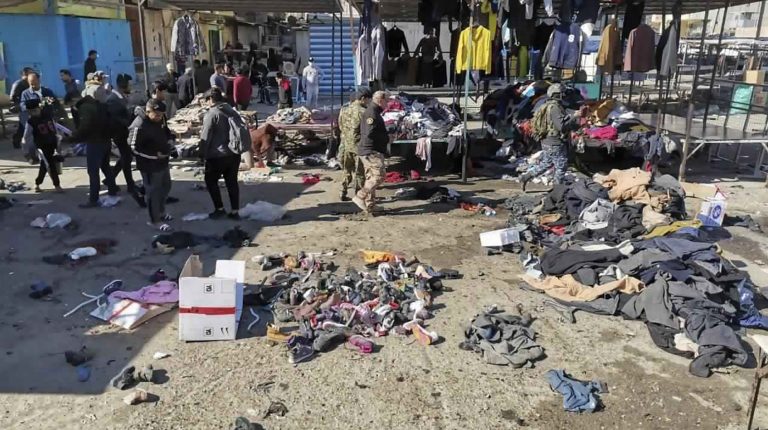 A deadly twin suicide attack in the Iraqi capital, Baghdad, killed at least 32 people and wounded more than 100, receiving international and regional condemnation.

The group known as Islamic State (IS) claimed responsibility, on Friday, for the double attack, in which it claimed that two of its members blew themselves up in a busy market in Baghdad’s Tayaran Square.

Since IS was defeated in Iraq in 2017, suicide attacks have become rare, though the group still poses threat. A United Nations (UN) report in August 2020 said, “More than 10,000 IS fighters are believed to be active in Iraq and Syria, moving freely in small cells between the two countries.”

In 2018, a deadly suicide attack in the Iraqi capital, also in Tayaran Square, killed 35 people and injured 90.

In a statement on Thursday, UN Secretary-General António Guterres condemned the attack, stressing that the “perpetrators must be prosecuted.”

Egypt’s Ministry of Foreign Affairs denounced the double attack, expressing deep condolences to the families of the victims, and the government and people of Iraq. The Egyptian side passed on its wishes for the speedy recovery of those wounded.

Jordan, the US, and the European Union (EU) also condemned the attack. Pope Francis I deplored Iraq bomb attacks, describing them as a “senseless act of brutality.”

The Pope, who plans to visit Iraq in March, said in a telegram sent to the Iraqi President that he “prays for the deceased victims and their families, for the injured and for the emergency personnel in attendance.”