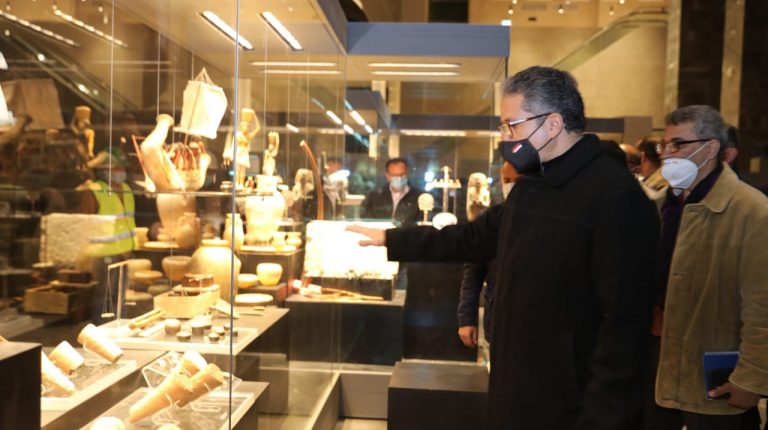 Egypt’s Minister of Tourism and Antiquities Khaled El-Anany visited, on Sunday, the Museum of Egyptian Capitals at the New Administrative Capital (NAC), to follow up on the preparations for its upcoming opening.

During the visit, El-Anany ordered some changes to the displays and labelling of some objects at the museum, to make them more appealing to visitors.

Othman said the new museum has received a number of antiquities from other museums. These include: ancient musical instruments from the Egyptian Museum in Tahrir Square, including an iconic harp; a wooden pulpit and a deck from the Museum of Islamic Art; Fatimid ceramics from the Gayer-Anderson Museum; and an apse decorated with a cross and clusters of grapes and seashells from the Coptic Museum.

The Museum of Egyptian Capitals narrates the history of the country’s old capitals across different eras, comprising nine capitals. These cover Memphis, Thebes, Tell Amarna, Alexandria, as well as Fustat, and the Fatimid and Khedivial Cairos.

The museum’s main hall showcases relics of ancient and modern Egypt. It also displays belongings from different ages that represent the patterns of life in each historical period, such as decorations, weapons, and correspondences.

The museum’s second section is a pavilion that represents the Ancient Egyptian afterlife. This part consists of the tomb of Toto that was discovered in 2018 in Sohag, in addition to a hall for mummies and coffins. It also features two display cases that contain Canopic jars and other objects imitating religious rituals in Ancient Egypt.

The display system uses modern technology, as the exhibition halls are equipped with screens displaying an interactive panoramic film depicting history. It also features an illustration of each of the ancient Egyptian capitals, including its architecture, religious buildings, and most famous landmarks.