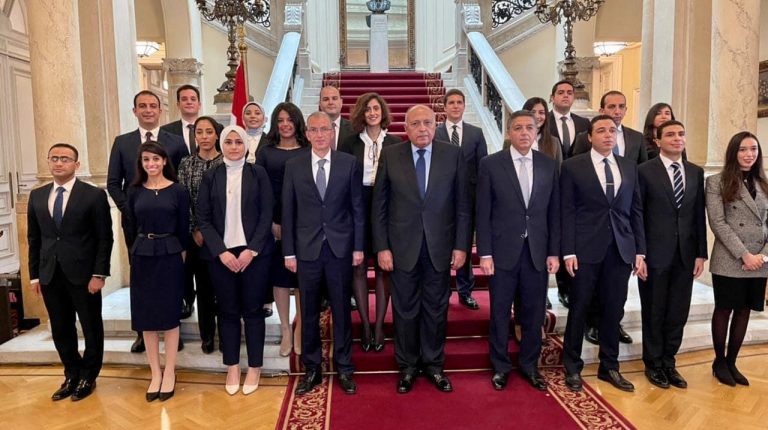 Egypt’s Minister of Foreign Affairs Sameh Shoukry attended, on Sunday, the graduation ceremony for two new batches of diplomatic attachés at the Tahrir Palace in Cairo.

Ahmed Hafez, Spokesperson for the Ministry of Foreign Affairs, said that the Minister congratulated the new diplomats on joining the Ministry, and conveyed to them his wishes for success in their future duties.

Shoukry emphasised the size of the responsibility entrusted to them, particularly in furthering the defence of Egypt’s interests abroad, as well as their important role in achieving the supreme goals of the Egyptian state.

He clarified the reality and size of the unprecedented achievements at home, with an emphasis on their responsibility to take care of the interests of Egyptians abroad and give them all due attention.

During the ceremony, the efforts made to refine the skills of the two new batches, which comprised of 52 and 53 new attachés, during their training period at the institute were reviewed.

A review also took place of all capabilities used to provide them with the comprehensive training content in line with the developments of advanced diplomatic work. This came in addition to the training period in which the new attachés achieved distinguished skills and capabilities that qualified them to represent Egypt abroad.

In the two new batches, there are 33 diplomats, including 14 female diplomats, from various scientific disciplines, including political science, law, business administration, pharmacy, and medicine. The two batches were named after Ambassador Mounir Zahran and Ambassador Moshira Khattab.