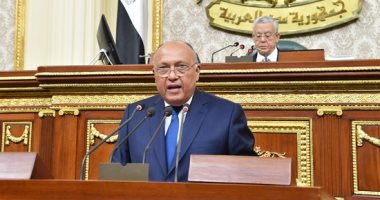 Egypt will not compromise or bow down to threats regarding its interests in the River Nile or its water rights, the country’s Foreign Minister Sameh Shoukry has said.

During his speech before the House of Representatives, on Tuesday, Shoukry added that Ethiopia has unilaterally started the filling of the Grand Ethiopian Renaissance Dam (GERD).

This has taken place without reaching an agreement with the other two countries involved in negotiations on the dam, namely Egypt and Sudan, and without taking into consideration the interests of these two downstream countries.

Shoukry said that his ministry has managed to bring the issue of the Ethiopian dam to the international community’s attention, referring to a special United Nations (UN) Security Council session held in June last year.

The minister noted that Egypt signed an agreement drafted by the US government to regulate the operation of the giant hydroelectric dam, which Ethiopia rejected to sign.

He said that his country has participated in all meetings and talks on this vital issue, but it only faces Ethiopian obstinacy.

Shoukry reaffirmed that protecting Egypt’s historical rights in the River Nile is a top priority for the Egyptian Ministry of Foreign Affairs.

He stressed that the country aims to reach a fair, balanced, and binding agreement that takes into consideration the interests of the three countries. The agreement will seek to protect the Egyptian and Sudanese peoples from any threats, whilst also achieving Ethiopia’s development goals.