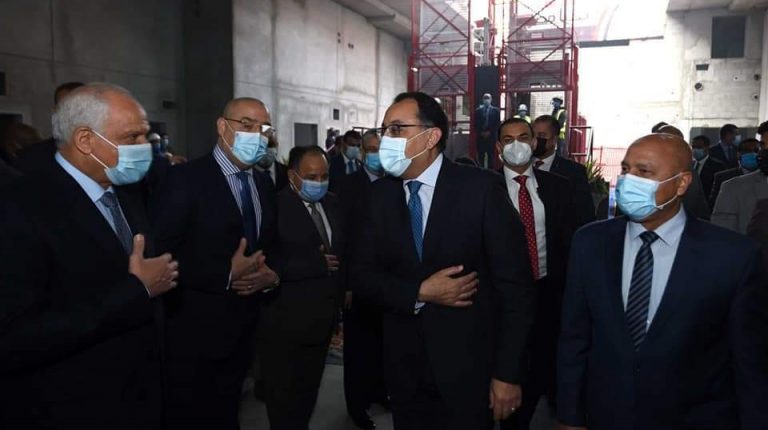 Egypt’s Prime Minister Mostafa Madbouly said, on Wednesday, that Egypt is accelerating towards a renaissance in different sectors, particularly its transport sector.

He asserted that Egypt is witnessing a renewed period in its infrastructure and mass transport network.

Madbouly’s remarks came during his inspection visit to follow up on the drilling works at the Kitkat Metro Station in Cairo, which lies on the Cairo Metro system’s Line 3. His high-level visit was undertaken along with a number of ministers and ambassadors also in attendance.

The Prime Minister said that mega transport projects are being implemented in Egypt, including the Cairo Metro Line 3, which will connect the Greater Cairo area in a massive network of clean transport.

Other transport sector projects include an express electric train network and a monorail, which all aim to contribute to an integrated network of transport and infrastructure.

Minister of Transport Kamel El-Wazir said that the 4kms of stations on Cairo Metro Line 3, covering the area between Ataba and Kitkat, will be inaugurated in December 2021.

El-Wazir said the underground drilling work along 929 metres between Zamalek and Kitkat has been completed. He also said that the third phase of Line 3 amounts to 17.7km, and includes 15 stations, adding that 49% of the work on the line has been completed.

The minister also said that the third phase will cost about EGP 40.7bn, while the entire third line will cost EGP 97bn. The Kitkat Station will take up an area of 3,800 sqm, and lie across three levels at a depth of 23 metres below ground.

After the completion of the third phase, the Cairo Metro Line 3 will connect Cairo with 6th of October City and the New Administrative Capital (NAC), as well as new cities including Shorouk, Obour. and Mostakbal. A monorail in Cairo will run from Nasr City, with another set to be built in 6th of October, to ensure an even more comprehensive transport system.