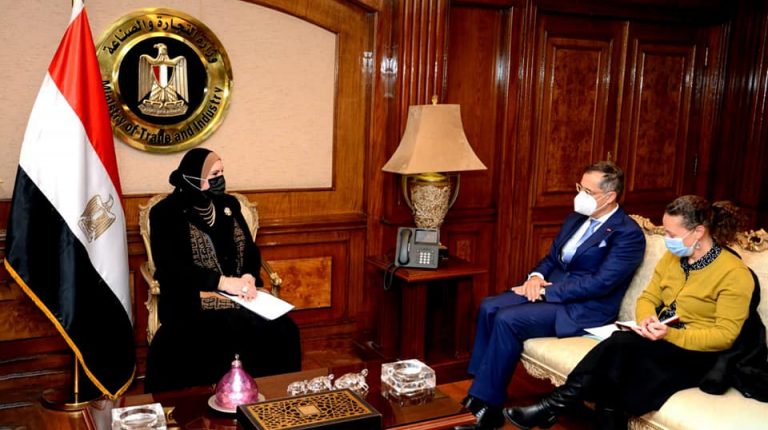 Egypt’s Minister of Trade and Industry Nevine Gamea has outlined the government’s keenness to expand cooperation with Switzerland in various economic fields.

This will see a particular focus on trade and investment cooperation between the two countries, and an agreement on a common vision regarding prospects for future cooperation at the economic level.

During her meeting with Swiss Ambassador to Cairo Paul Garnier, Gamea said that Egypt is keen to activate the European Free Trade Association (EFTA) agreement signed between Egypt and EFTA states. This would also see the facilitated entry of Egyptian exports of agricultural, commercial, and food products.

The minister noted the importance of strengthening cooperation with the Swiss side, and benefiting from the country’s experience in support of small- and medium-sized enterprises (SMEs).

This comes especially since nearly 99% of the Swiss business sector is made up of SMEs which contribute about two-thirds of job opportunities in the country’s economy.

The minister added that Egypt is keen to increase the volume of its trade exchange with Switzerland, and noted that the trade exchange between the two countries reached about $960m in 2020.

Gamea added that Switzerland ranks 15th on the list of countries investing in the Egyptian market, contributing capital of $2.179bn to 433 projects.

The minister said that it is important to work on fixing the trade imbalance between Egypt and EFTA states. At the same time, cooperation will be intensified to hold a series of activities aimed at introducing the requirements of the Egyptian business community for exporting to the EFTA market.

This will take into account the advantages that the agreement guarantees for Egyptian exports, with a focus on sectors of relative importance to Egypt.

For his part, Ambassador Garnier expressed his country’s keenness to deepen the joint economic cooperation with Egypt, especially in light of the strategic relations that bind the two countries.

Garnier added that Egypt holds a special place with the Swiss investor, especially as it represents a major export window for other markets, namely in Africa, which is also the largest market for Swiss exports.