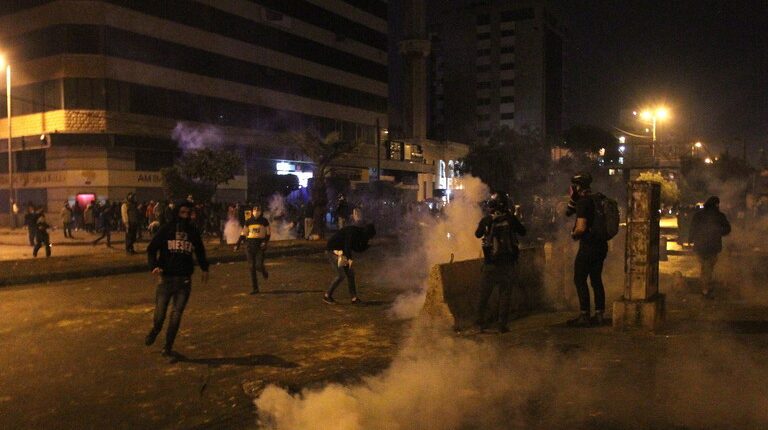 A young Lebanese was killed and 226 others were wounded in Tripoli during overnight clashes between security forces and anti-government protesters angry that a strict lockdown has left them with no means to survive the economy’s collapse.

According to eyewitnesses, the riot police fired live bullets in order to stop the protesters who tried to storm the northern city’s government building.

Other witnesses said that the security forces fired tear gas and rubber bullets at protesters who threw stones, hurled Molotov cocktails and lit a car on fire.

The clashes had 226 protesters and security forces injured, while a 30-year-old man was died of his injuries, Lebanese state media reported.

Lebanon’s Internal Security Forces said “hand grenades” were thrown, including at a patrol, and injured at least nine officers. They pledged to respond with “full severity and decisiveness.”

The Lebanese Red Cross announced that one of the security members was seriously injured while 63 protesters were treated on-site and 35 others were transferred to nearby hospitals.

The police did not immediately respond whether live rounds had been fired and whether a protester was killed.

However, Reuters footage showed sparks hitting the ground, apparently from ricocheting bullets, and the sound of gunfire.

The Lebanese army restored, on Thursday morning, security in Tripoli, after a long night of confrontations with the protesters.

This is the third consecutive day of protests in Tripoli against the total lockdown imposed by the authorities to curb the spread of coronavirus (COVID-19) pandemic.

Lebanon imposes lockdown for 25 days amid surge in coronavirus cases