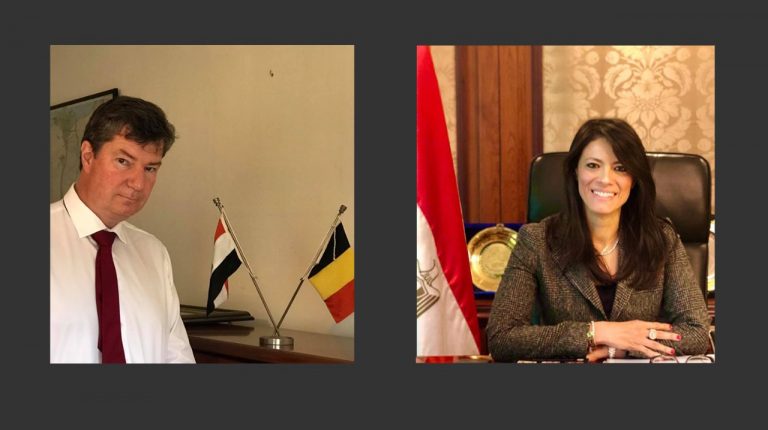 The meeting, which was also attended by Haguer Magdi, Head of Commercial Negotiations at the Belgian Embassy, ensured that the plans fall in alignment with Egypt’s 2030 development goals.

The history of cooperation between the two countries is extensive, and has been tangible in many sectors. This is particularly so in cultural development plans concerning the construction of the Grand Egyptian Museum (GEM), and the restoration of the Baron Empain Palace, among many other projects.

The principles of Economic Diplomacy are the core of all multilateral and bilateral cooperation partnerships, Minister Al-Mashat emphasised during the meeting.

She outlined that the principles consist of the organisation of multi-stakeholder platforms that bring together the development partners and the governmental institutions in order to align objectives.

It also covers the mapping of the ODA per the UN’s sustainable development goals (SDGs) in ensuring that the development financing is best allocated and utilised in various projects. The final principle of Economic Diplomacy covers Global Partnerships Narrative that ensures transparency across all communications and with all stakeholders.

Minister Al-Mashat added that her ministry has been working on various agreements with the European Union (EU) regarding the projects listed for development financing in the coming year.

D’Elzius expressed his admiration of the Ministry of International Cooperation’s 2020 annual report, titled “International Partnerships for Sustainable Development: Writing the Future in a Changing Global Dynamic”.

The report paves the way for a transparent development communication, with the Ambassador adding that Belgium is eager to further cooperate with Egypt on the development of the Micro, Small, and Medium Enterprises (MSMEs) sector.

He added that his country is also keen to contribute to the establishment of a strong public-private dialogue in the Egyptian Business Sphere.

The bilateral cooperation portfolio currently encompasses the health sector, with ongoing talks with Egypt’s Ministry of Health and Population studying the need for Belgian support in the sector.

Moreover, Ambassador D’Elzius expressed the interest in developing cooperation platforms between Belgian and Egyptian companies working in similar fields. This will deepen the development partnership between both countries.

Minister Al-Mashat followed the offer by ensuring the organisation of a Multi-Stakeholder Platform, where these companies are brought in together for projects’ negotiations.

Egypt and Belgium have cooperated on the restoration project of the Baron Empain Palace, constructed in the early 20th Century by the wealthy Belgian industrialist Baron Edouard Empain.

The restoration work on the palace, located in the Cairo district of Heliopolis, was undertaken as part of the Debt-Swap programme between both countries for an agreement worth €2.14m (EGP 16m). A Memorandum of Understanding (MoU) was signed on 11 September 2019 regarding this.