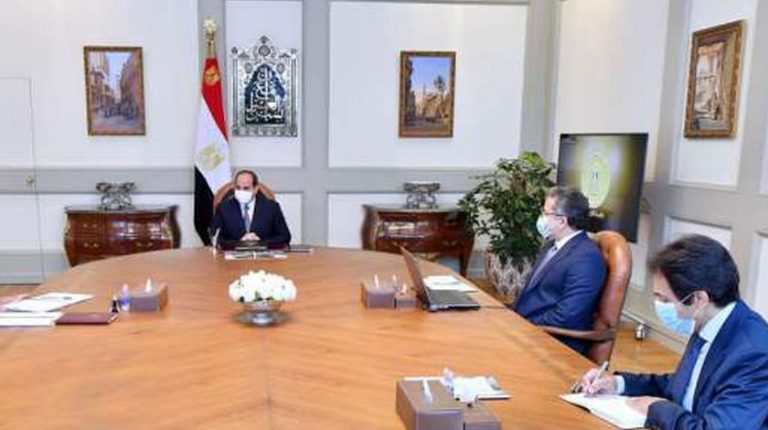 Egypt’s President Abdel Fattah Al-Sisi has directed for work on projects across Egypt related to tourism and archaeology to continue.

The work will integrate and take place in coordination between the various concerned bodies, as part of the Egyptian government’s  strategy to restore the historic lustre of the country’s archaeological sites.

It will also highlight Egypt’s cultural and civilizational heritage throughout the ages, through the comprehensive restoration of archaeological sites.

This will focus particularly on the Greater Cairo area, which has ancient and varied historic potentials, to serve as an open museum with an aesthetic and organised character similar to major global capitals.

President Al-Sisi’s remarks during his meeting with Prime Minister Mostafa Madbouly and Minister of Tourism and Antiquities Khaled El-Anani, according to Presidency Spokesperson Bassam Rady.

Rady added that the high-level meeting dealt with following up on the national activities and projects under the Ministry of Tourism and Antiquities.

Notably, 2021 is expected to witness huge archaeological and tourism-related events, foremost of which are the inauguration of the Grand Egyptian Museum (GEM) and a parade of Royal Mummies to their new home.

This comes in addition to the opening of the Museum of Egyptian Capitals at the New Administrative Capital (NAC), the replicas factory, the Graeco-Roman Museum in Alexandria, as well as Shoubra’s Muhammad Ali Palace and Tea Island.

During the meeting, El-Anani reviewed the state’s efforts to support Egypt’s tourism sector during 2020, which saw the merging of the tourism and antiquities sectors. These measures saw the consolidation of the two sectors’ merging within a single framework.

El-Anani also presented the measures taken by his ministry in terms of digital transformation in coordination and cooperation with all government agencies. This included the creation of a central database to register and document artefacts, whether those displayed in museums or exhibitions, and link them electronically.

He also presented the rates of Egypt’s inbound tourism flow during the past year, taking into account the impact of the novel coronavirus (COVID-19) pandemic.

El-Anani reviewed the most important initiatives taken by the Ministry of Tourism and Antiquities to encourage domestic and foreign tourism to Egypt. This came in addition to the worldwide media campaign launched by the Ministry to promote tourism to Egypt, through a set of introductory films prepared in cooperation with major specialised companies.

Rady added that the meeting also witnessed the presentation of the latest developments in the Ministry of Tourism and Antiquities’ activities during 2020. The presentation focused particularly on the opening of several museums across Egypt, including the Museum of Royal Vehicles, as well as the museums at Sharm El-Sheikh and Kafr El-Sheikh.

The steps to implement a number of major archaeological and tourism projects, such as the NAC’s Museum of Egyptian Capitals, as well as the GEM, were also reviewed.