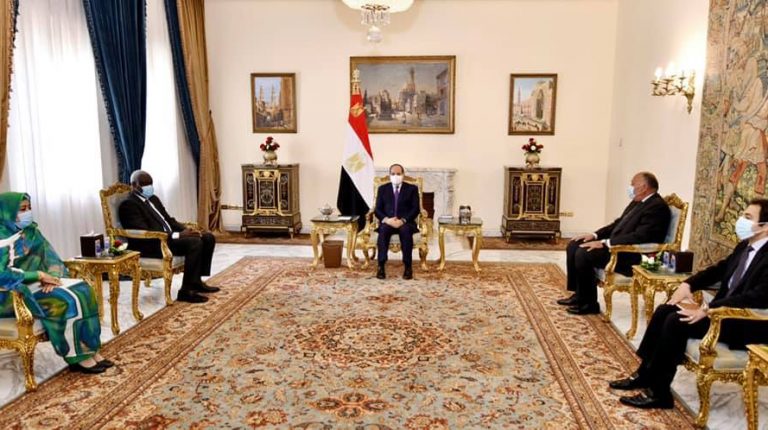 Egypt’s President Abdel Fattah Al-Sisi has reiterated that his country will not allow any procedures that violate its rights to River Nile water.

During a meeting with African Union (AU) Commission Chairperson Moussa Faki Mahamat, President Al-Sisi also reaffirmed that Egypt has not, and will not, spare any effort to support other African countries, according to the Presidency Spokesperson Bassam Rady.

The President added that Egypt will always extend its hand for cooperation, construction, and development for the sake of all African countries, to strengthen the free will of their peoples, their security, and stability.

According to a statement, the meeting between the Egyptian President and Mahamat witnessed an exchange of views and a review of the President’s vision regarding a number of African issues. This came in light of the ongoing preparations for holding the next annual African summit.

Mahamat affirmed that the AU’s efforts are based mainly on Egypt’s role, under the leadership of President Al-Sisi, and its weight in the African continent, which represents the strong pillar of joint African action.

He expressed his confidence in Egypt’s ability to continue to play its role in promoting development efforts in Africa, in addition to maintaining security and stability.

The meeting also dealt with a number of political issues, as well as the conflicts in the African continent and efforts to settle them politically.

The issue of the Grand Ethiopian Renaissance Dam (GERD) was also reviewed within the framework of the tripartite negotiations under the AU’s auspices.

President Al-Sisi reaffirmed the constants of Egypt’s position to reach a comprehensive and legally binding agreement between all concerned parties, especially the rules for filling and operating the dam.

He asserted that Egypt will not allow any procedure that violates Egypt’s rights regarding River Nile waters. He highlighted the importance of continuing intensive coordination to work on resolving the current situation and reaching a fair and balanced agreement.

Mahamat also met with Egypt’s Minister of Foreign Affairs Sameh Shoukry, on Sunday, to discuss the latest developments in the continent’s political sphere, ahead of the African summit next month.

The summit was held this year under exceptional circumstances, due to the novel coronavirus (COVID-19) pandemic, under the slogan “Arts, Culture and Heritage: Lifts for Building the Africa We Want”.

Mahamat recommended that the 34th regular session of heads of state and government take place in person at the AU’s headquarters on 6-7 February. At the summit, the AU will witness the elections for the Union Commission, which will include the Chairperson and Vice-Chair of the Commission and six other commissions in various specialties.

Mahamat is the only candidate who has applied for a new round to occupy the position according to the African Union. This may enhance his chance to gain re-election.