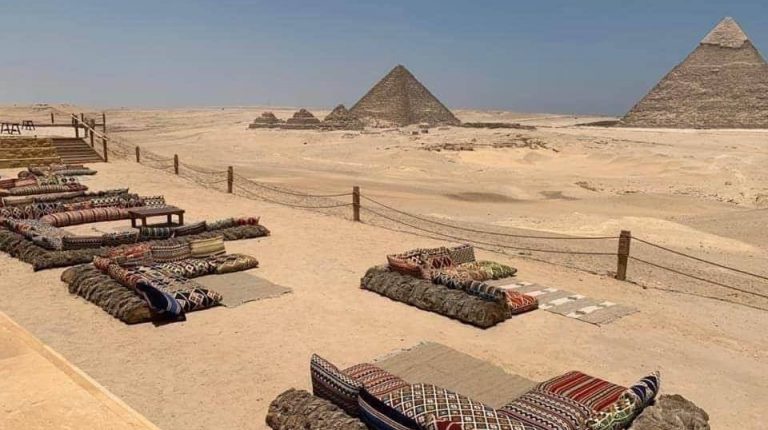 Egypt’s Minister of Tourism and Antiquities Khaled El-Anani has agreed for an open-air restaurant to be opened before Ramadan at the Great Pyramids of Giza area.

The restaurant will be designed in a simple style, and constructed using natural materials according to the requirements of one of Egypt’s most famous archaeological areas.

The agreement came during the minister’s meeting with Orascom Investment Holding Chairperson and CEO, Naguib Sawiris. During the meeting, the two sides  discussed the latest developments in the project to provide, operate, and raise the efficiency of tourism services provided to visitors in the Giza Pyramids area.

During the meeting, Sawiris said that a number of environmentally friendly electric buses will be supplied to operate in the archaeological area.

The Engineering Consultation Center at Cairo University’s Faculty of Engineering has approved the technical specifications and field tests of the electric buses, for which trial operations began last October. This occurred at the same time as the opening of the first tourist restaurant and lounge, called the “Nine Pyramids Lounge”, in the Panorama area of the Pyramids Plateau.

According to the Giza Pyramids development project, these buses will be operated on the visit route, and will replace the vehicles and buses which have now been banned from inside the archaeological area.

The buses will be operated through six main stations, starting from the Visitor Center station, passing through the Pyramids of Menkaure, Khufu, and Khafre. The final stop of the electric bus is located at the Sphinx, before busses return to the Visitor Center.

According to a Ministry of Tourism and Antiquities press statement, the engineering work in the project to develop the Giza Pyramids area has been completed, and is set to raise the efficiency of services in the area.

The work was implemented by the Engineering Authority of the Armed Forces with government funding, and preparations are now underway to start operating the project. This is provided that the visit to the area starts from the new visitors’ entrance located on the Fayoum Road.

Notably, the construction of the “Nine Pyramids Lounge” occurred with full respect for the requirements and sensitivity of the area. It is a simple wooden building with pillows spread on the floor in a Bedouin style, and can be found in a unique location providing a scenic view of the Pyramids.