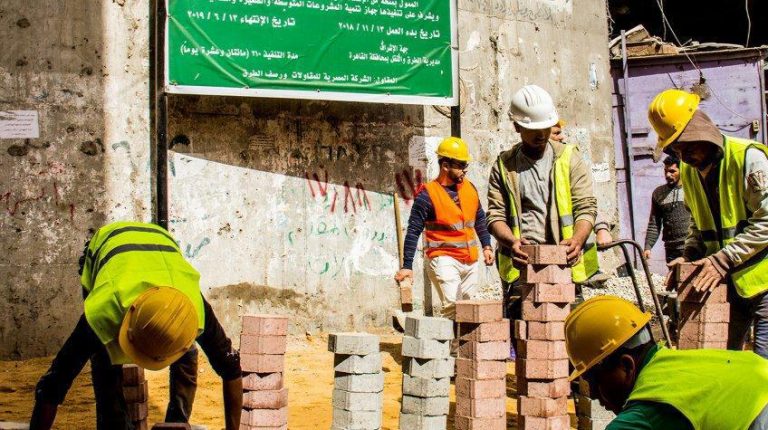 The projects implemented have targeted villages and hamlets most in need of these services, by: providing drinking water; developing sanitation networks; paving roads; clearing canals and drains; and restoring schools and youth centres.

Gamea added that MSMEDA, of which she is also Executive Director, has also provided 30 million employment opportunities for daily workers in the period from July 2014 until the end of 2020.

These opportunities were through the infrastructure and community development projects that MSMEDA implements, under the auspices of the United Nations Development Program (UNDP). The projects, located across Egypt, have received funding from various donors.

The minister said that the agency is working within an integrated cooperation system with various ministries and governorates, to implement the directives of President Abdel Fattah Al-Sisi. These directives have been put in place to provide a better environment for citizens in the villages most in need.

She added that the agency relies on implementing these projects with local contractors in various governorates, who are trained and qualified to use intensive labour instead of machinery and equipment.

This ensures daily wages for irregular workers who can develop their skills and increase their chances of obtaining better job opportunities after the projects ends. This comes in addition to providing community service projects in the fields of health, education, and the environment.

Gamea said that MSMEDA is keen to continuously coordinate with the Ministry of International Cooperation in providing the necessary funding for these projects. This will come from donors and international institutions, in order to expand their implementation.

The financing has helped the agency and its projects to continue functioning during 2020. This has also contributed to providing adequate income for thousands of irregular workers to face the economic conditions imposed by the novel coronavirus (COVID-19) pandemic.

For his part, Medhat Masoud, Head of the Central Sector for Community and Human Development at MSMEDA, said that, in 2020, the agency began implementing a number of initiatives to improve the living conditions of citizens.

These projects focused particularly on those areas suffering from illegal migration, and included the activation of activities of the agreement with the European Union (EU) to deal with this subject.

He said that, as part of coordination and cooperation with civil society institutions, 120 NGOs and civil institutions were contracted out of the target 175, to start implementing the agreements activities and projects. The activities have been implemented in five of the 11 governorates covered by the agreement.

These governorates include Luxor, Assiut, Minya, and Fayoum in Upper Egypt, and the governorates of Beheira, Sharqeya, Daqahleya, Gharbeya, Qaliubiya, Menoufiya, and Kafr El-Sheikh in Nile Delta area.

He added that the agency, in cooperation with the Ministry of Health and Population, is also training female counsellors and supervisors working in health and population programmes across 11 governorates. The training aims to develop their capabilities, which leads to improving services provided to families in these areas.

Masoud added that the agency continues to implement a number of other agreements. This includes the agreement in cooperation with the European Investment Bank (EIB) to implement infrastructure improvement projects in six governorates.

The agreement covers the governorates of Alexandria, Port Said, Giza, Assiut, Menoufiya, and Sharqeya. In addition, there is the urban upgrading programme funded by the French Development Agency (AFD), for the development of four areas in the governorates of Cairo and Giza, namely Al-Zawia Al-Hamra, Ezbet Khayrallah, Ard Al-Liwa, and Mitt Aqaba.