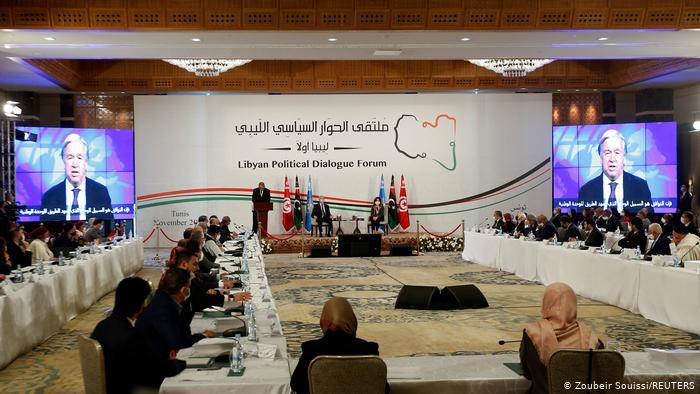 The LPDF is currently being held in Geneva under the auspices of the United Nations (UN), with the participation of 75 representatives from all Libyan parties. The forum, which will come to an end on 5 February, is expected to elect the new temporary unified executive authority from a list of 45 officials.

Faqih reiterated the AU’s continued commitment to “supporting and accompanying the Libyan people on their path towards peace, reconciliation and reconstruction”.

In a statement published on the pan-African organisation’s website, Faqih congratulated the LPDF and Libyan People, after the forum’s members began a new round to select government heads and a Presidential Council.

The representatives chosen will be responsible for ensuring a peaceful transition until the country holds parliamentary elections on 24 December 2021.

Faqih praised the transparency of the process in nominating candidates to participate in the new unified transitional government’s leadership, which includes positions of executive authority.

In a joint statement following their meeting in the Egyptian capital, Cairo, on Monday, the Arab League and AU had declared the importance of intensifying efforts to support the parties in Libya. This support would be given to ensure these parties complete the path of peaceful settlement of the Libyan crisis in all its aspects.

The LPDF continued on Tuesday, for the second day in a row, as the UN expressed great optimism about the achievements made to end the east-west divisions that Libya has been experiencing for years.

The UN’s Acting Envoy to Libya, Stephanie Williams, praised the recent progress made by the intra-Libyan political dialogue.

The second day of the forum’s discussions was devoted to the candidates presenting their programmes, with the potential that this may extend to Wednesday. The selection process is expected to take place at the end of the week.

The UN has pledged that the process of selecting representatives of the executive authority in Libya will be open and transparent.

In their presentations emphasising their programmes, on Monday, the candidates for the Presidency Council emphasised the importance of the reconciliation file for the success of the transitional period. It is scheduled to last until 24 December 2021, when elections take place.

The candidates discussed the reparation for harm and return of displaced individuals to their homes. They also pledged to abide by the date of holding the 24 December general elections, whilst emphasising that they will work to achieve a smooth transfer of power to whom the people would choose.

On the selection of the army’s Commander-in-Chief, the majority of the candidates said that this matter will be left to the 5+5 Joint Military Committee, relying on the success it has achieved and reaching a ceasefire agreement. .