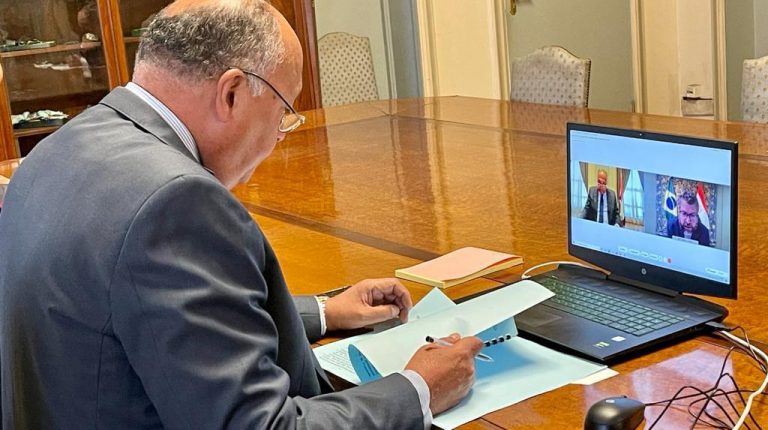 Egypt’s Minister of Foreign Affairs Sameh Shoukry received a video call from his Brazilian counterpart Ernesto Araujo, on Monday, during which the two exchanged views on opportunities for strengthening bilateral cooperation.

During the meeting, the two also discussed a number of regional and international issues of mutual interest between Egypt and Brazil.

In a statement, Ahmed Hafez, official Spokesperson for Egypt’s Ministry of Foreign Affairs, said that the two ministers emphasised the strength of the relations between the two countries at various levels.

They also highlighted their joint aspirations to enhance them through intensified bilateral consultations to address all issues and issues of mutual concern. The two ministers agreed to undertake further efforts to encourage interaction between the private sector in the two countries, especially in the fields of agricultural business, medical and pharmaceutical research, science and technology.

This comes in addition to working to strengthen trade and investment relations between Egypt and the MERCOSUR group. Shoukry and Araujo emphasised the importance of Brazil’s cooperation with Egypt in projects implemented by the Egyptian state in Africa, in order to achieve the common good of the African countries.

Hafez noted that a number of files were discussed, including the Grand Ethiopian Renaissance Dam (GERD), where Minister Shoukry reviewed the latest developments in the file and the Egyptian position in this regard.

Shoukry outlined the importance of reaching a binding legal agreement regarding the rules for filling and operating the dam. This would take place by engaging in serious negotiations in a way that achieves the common interests of the parties concerned.