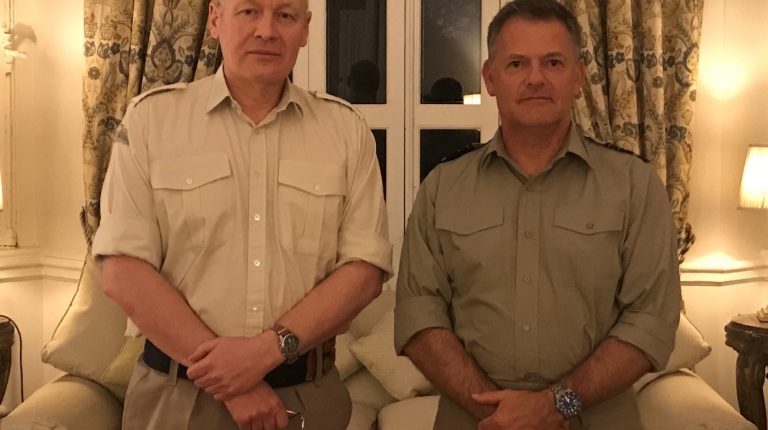 The current UK Chief of Defence Staff’s Senior Advisor to the Middle East and North Africa (DSAME), Lieutenant General Sir John Lorimer, and his successor Air Marshal (AM) Martin Sampson, have wrapped up a three-day official visit to Egypt.

This visit is particularly significant, as it marks the handover of the DSAME role from Lt Gen Lorimer to AM Sampson.

During the visit, the two DSAMEs held high-level meetings with senior representatives from the Egyptian Armed Forces, and were accompanied by British Defence Attaché Captain (Royal Navy) Stephen Deacon. They met with Egypt’s Assistant Defence Minister for External Relations, to discuss military aspects of common interest.

Moreover, bilateral discussions were convened with the Commanders of the Egyptian Navy and the Air Force. Both sides deepened their understanding of how the two nations’ Navies and Air Forces can work together, to reinforce bilateral cooperation and interoperability in future joint exercises.

Making remarks at the end of his visit, Lorimer said, “As I conduct my last official visit to the region as Defence Senior Adviser Middle East and North Africa (DSAME), it feels fitting that it is in Egypt, the country where I lived in the mid-1980s, and where I studied Arabic and Islamic Studies.”

“I have had a deep affinity and respect for the country, its people, culture and history since that time, so it has been a privilege to help develop the bilateral relationship between the United Kingdom and Egypt during my time in this role,” he added, “The very positive meetings that we have attended during this visit are a reflection of the strength of the relationship between our two countries. Long may that continue.”

Sampson added, “It has been a great privilege to visit Egypt with General Lorimer in preparation for my new role as Defence Senior Adviser Middle East and North Africa (DSAME).”

He also said, “The meetings and engagements have given me a very clear sense of the importance and standing of Egypt in the region and the Arab world.”

Sampson noted that the current joint work and co-operation, as well as the plans for future collaboration between the UK and Egypt, is exciting and is a clear reflection of the strong mutual respect and ambition.

“I look forward to returning to Egypt in the very near future, to build on the trust and friendships that General Lorimer has developed and to strengthen the bilateral relationship even further,” he added..

British Ambassador to Egypt Sir Geoffrey Adams said, “Lieutenant General Sir John Lorimer has been a great asset to our defence relations with Egypt, and I would like to thank him for all his hard work and his commitment to strengthening UK-Egypt military cooperation.”

“I would also like to congratulate Air Marshal Martin Sampson on his appointment as the UK Chief of Defence Staff’s new Senior Advisor to the Middle East and North Africa (DSAME),” the Ambassador said.

He noted that he is looking forward to working with Sampson on furthering the UK’s defence cooperation agenda in Egypt, and on promoting security and stability in the region.