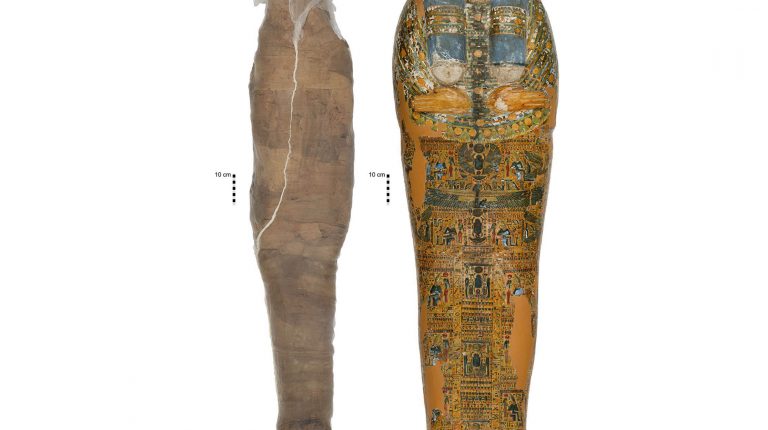 Radiological imaging of a mummified individual from the late New Kingdom of Ancient Egypt has resulted in the discovery of a rare painted mud carapace layer within the body’s wrappings.

Resin carapaces have been found before, but this is the first time that a painted mud shell of this kind has been discovered and studied, a new paper published in the journal PLOS ONE reported. The mummy has been dated from the late New Kingdom period in Ancient Egyptian history, which occurred during the 12th century BCE, or about 1200-1100 BCE.

Karin Sowada, a research fellow at the Department of History and Archaeology of Australia’s Macquarie University and lead author of the paper, said, “This is a new discovery in Egyptian mummification that will expand our understanding of how the Ancient Egyptians treated their dead.”

The mummy began its journey from Egypt to Sydney’s Chau Chak Wing Museum in 1890, after the return of English-Australian politician Sir Charles Nicholson from his trip to Egypt in 1856-7.

He bought the mummified body, lidded coffin, and mummy board as a set, and then donated it to the University of Sydney. The inscription on the coffin identifies the owner as a titled woman named Meruah, and the iconography dates it to approximately 1000 BC.

The current analysis of the mummification technique and radiocarbon dating of textile samples from the linen wrappings place the mummified individual in the late New Kingdom (about 1200-1113 BCE).

This means the body is older than the coffin, suggesting local 19th century dealers placed an unrelated body in the coffin to sell as a complete set.

“As archaeologists are still researching the purpose of hard mud shells in mummification, this study provides a wealth of new data,” Sowada said.

She added, “We believe that previous radiological studies of mummified bodies in other museums may have misidentified resin carapaces within the wrappings, and that many might be made of mud.”

Furthermore, the researcher called for the re-examination of earlier computed tomography CT analyses.

Is Nefertiti long-looked-for mysterious mummy buried next to Tut?