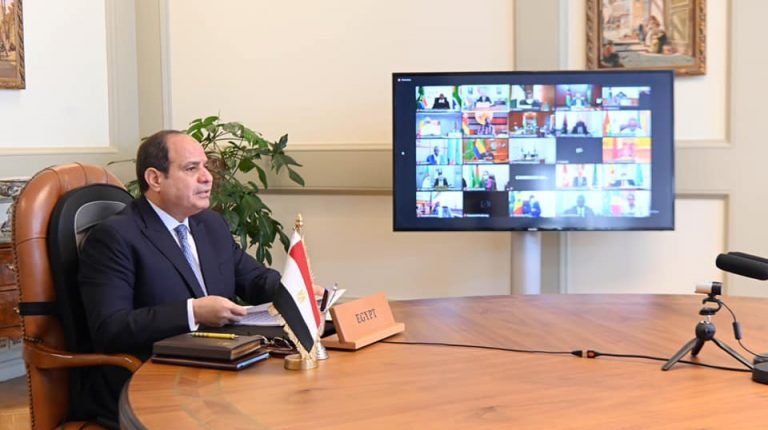 Egypt’s President Abdel Fattah Al-Sisi asserted, on Saturday, the importance of strengthening joint African efforts to combat the repercussions of the novel coronavirus (COVID-19) pandemic on the continent’s economy, health, and security.

President Al-Sisi affirmed the need to continue developing Africa-wide infrastructure as an essential step to achieve the desired integration. This would come in addition to activating the African Continental Free Trade Area (AfCFTA) agreement, stressing Egypt’s support for the African Development Agenda 2063.

According to Presidency Spokesperson Bassam Rady, President Al-Sisi also touched on the vital role of the institutional, financial, and administrative reform process in the AU. The President’s remarks came during his participation at the 34th African Union (AU) Virtual Summit.

He was also keen to express his thanks and appreciation to South African President Cyril Ramaphosa for sponsoring the tripartite negotiations between Egypt, Sudan, and Ethiopia regarding the Ethiopian dam project.

The negotiations, held during South Africa’s presidency of the AU, have sought to reach a comprehensive, fair, and binding agreement regarding the filling and operation of the Grand Ethiopian Renaissance Dam (GERD).

Earlier on Saturday, Rampahosa handed over the reins of the AU presidency to the Democratic Republic of Congo (DRC), who will hold the position for a year.

The 34th AU Summit commenced on Saturday, however the 55-member pan-African bloc met virtually due to the ongoing global health crisis. During the summit, Ramaphosa conducted a symbolic handover of the AU flag to the DRC’s President and incoming AU Chairperson, Felix Antoine Tshisekedi.

During his speech, Ramaphosa said that, despite the crisis in Africa caused by the coronavirus pandemic, the continent’s response was strong. He highlighted the cooperation, flexibility, innovation, and sharing of strategies and resources between African countries, as part of efforts to combat the pandemic.

“This disease has caused great suffering and hardship across our continent,” Ramaphosa said, “It is not only a severe health emergency, it is also a grave economic and social crisis.”

He pointed out that, although its people have shown determination and the ability to achieve this goal, Africa has a long way to go to ending all conflict on the continent.

This year’s two-day African Union Summit took place under a theme of “Arts, Culture and Heritage: Levers for Building the Africa We Want”. One of the top points of discussion, however, will be the continent’s response to the COVID-19 pandemic, and how economies can overcome the damage.

The summit will also tackle security issues in Africa, including in the Sahel, Libya, South Sudan, and Somalia. The attending leaders are also expected to elect the AU Commission’s Chairperson, alongside voting for six commissioners. The incumbent Chairperson, Moussa Faki Mahamat, is running unopposed for a second four-year term as commission chief.